Soups and I have had a long lasting affair. So, it is really no wonder that I picked Soups and Salads as a theme for this month's MBP. Given that summer was upon us, I thought I'd pick a cold soup or a salad as spending even a few minutes over a pot of soup didn't seem very exciting. It was something I could have done without. But then the weather changed. All of a sudden, it was a pleasure to slave in front of the stove. The storm that we've been having for this past week has given us a wonderful respite from the heat. And so, all I wanted was to get my hands around a bowl of soup and feel warm. Since S was out most of the week before last and I was out on a camping trip later, we were out of vegetables. I had just what it took to dish out Nupur's Tomato Red Pepper Saar. I know for a fact that this will be made often. The addition of onions and red pepper to my ordinary Tomato Saar took it to a different level.
I modified Nupur's recipe a wee bit and we had it with some Pulao and Egg Curry. 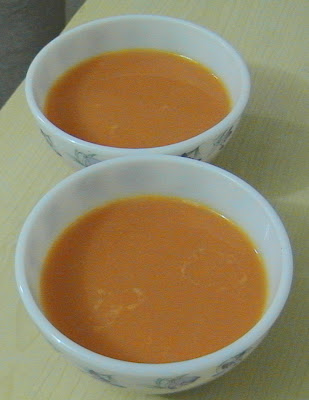 4 Tomatoes, chopped
1 Onion, diced
1 Red Pepper, diced
1 tsp Oil
3 pods Garlic, chopped
2 Green Chillies, sliced
100 ml Coconut Milk (about 2/3 cup)
1 tbsp Jaggery
Salt to Taste
Heat the oil and fry the onion, garlic, chillies and red pepper. After 3-4 minutes, add the tomatoes along with 1/2 a cup of water. Cook until soft. (Alternatively, you could do this in a pressure pan and pressure cook for 1 whistle.) When cool, blend in a liquidizer and strain. Add the coconut milk, jaggery and salt and bring to a boil.
I skipped the seasoning that evening, but will make it as a traditional saar the next time. Thanks Nupur for a simple and fantastic recipe. 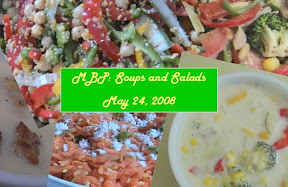 Today is the last day for this month's MBP: Soups and Salads. If you haven't already sent in your entries, now is the time to do so.
Posted by Raaga on 5/24/2008

Saar and pulao is simply a heavenly combination, especially in rainy weather!
Thanks for trying the recipe :)
I never did get around to making anything for your lovely event :( but I know I will enjoy looking at the round-up!

Raaga,
What was the seasoning you miseed?
I am going to try this too.

Thanks Arundhati. This's a nice soup. 2 additional things I'd do, are : use skim milk instead of coconut milk (seriously high in saturated fat). Use 1/4 tsp corn starch to thicken, if needed.
--Deepa

Yo Namesake - Lovely! I do hope we get to meet this time when you're here! Glad I got to participate in your event - looking fwd to the round-up!

@Thanks Nupur :-) This is really a keeper. No worries, I'm hosting WBB next month and you can send in an entry there :-)

@Deepa: Skim milk would make this a soup... not a saar which is rasam like. Since we don't consume stuff like coconut milk everyday, this is a welcome change.

@Arundathi: I sure hope we can :) thanks for participating.
Divya &Swati: Thanks :-)