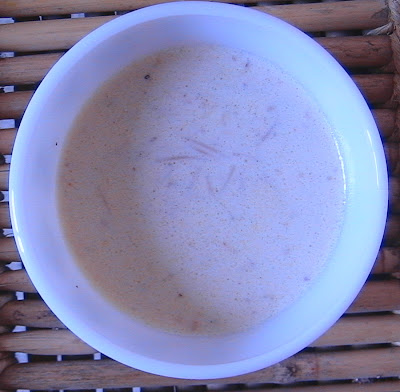 I’ve talked earlier about my general dislike for payasam/kheer. Madgane, Badam Kheer and Rava Payasam are the few varieties I enjoy. But coconut milk kheers do not feature in Tamil festival menus (at least not in my house). So, if it isn’t badam kheer, then it has to be Semia (Vermicelli) Payasam. While I really like this payasam, S really loves it. I made it recently after a gap of some 18 months. The last time I made it was when we completed a month of marriage. We were not living together at the time as our jobs were in different cities and I happened to be in Gurgaon around then for some interviews.


I remember that day because it was terrible. I had specifically told the consultant that I wanted a job with normal working hours and that the worst case scenario would be one where I finish work by 9 p.m. The job I’d taken up in Bangalore required me to work at a different time each day of the week and since I had a personal compulsion to move to Bangalore, I accepted the job with every condition the company laid. I did not want to just accept any job that came my way in Gurgaon. I wanted a job with timings that would more or less coincide with S’s work timings. The two hour interview ended with a, “So, I am told you’re open to working till 1 a.m. twice or thrice a week.” I was seething inside. I spent my hard earned money to get on that flight and come to Gurgaon. I spent more money hiring a cab to ferry me to and from that interview. And I felt as though all of that was a total waste. I needed to do something to shake myself out of that lousy mood. So I made semia payasam. The only sweet dish I could make on a hot plate (we had no fridge, gas stove or microwave then). And the look of utter delight on S's face when he saw the payasam was enough to get me out of that lousy mood.

I will blog about the original recipe sometime later. The one all of us know and love. This payasam has a little twist in the tale. I did not add cashews and raisins fried in ghee to the dish. Instead, I added ground cashews to the dish.


Heat the ghee and roast the vermicelli for a couple of minutes. Add the milk to it and bring to a boil. Add the condensed milk to this. Keep stirring until the mixture is even (else you'll have burnt condensed milk). Add the ground cashews and the cardamom powder and simmer the mixture for about 10-15 minutes. It will begin to thicken nicely.
Serve hot or cold. This tastes heavenly either way. (The picture does it no justice!)
This is off to Easy Crafts for the Think Spice… Think Cardamom event.
Posted by Raaga on 5/07/2008

Semia payasam is my favourite...made it some days ago :) Your life is full of stories :) I don't have any such things to write about :(

I haven't made this in a long time, looks yum!:)
Sent you my entry for MBP, hope you got it.

love semia payasam...but seldom make it....adding the powdered cashews is such a nice way to add flavour and thickness....must try this...

powdered cashews... that is a great idea.. I add it to some curries, but never thought of doing it for a payasam... BTW I have my MBP entry ready... :)

I too have never tried powdered cashews...great idea, thanks for sending it to the event

Never tried with powdered cashews Raaga.Different one .will try.

I love Kheer! and the recipe looks interesting. Will be trying for sure.

anything made with condensed milk will taste awesome for sure :)

Why do you have to be living so very far? I almost never make these treats as they are meant for more than one :(

a delicacy at my place...

saw a writeup on ur blog in today's hindu!!

a delicacy at my place...

saw a writeup on ur blog in today's hindu!!

Dear ragga,
saw an article about your blog in hindu, good beginning.........keep it up. could you please tell me how to start a food blog..........'thanks, mrs varghese