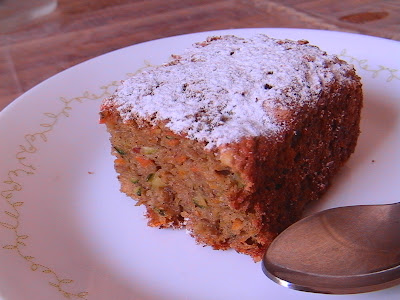 Of late, I have been having a lot of conversations with friends about food and cooking. I really love cooking, but more than that, I love good food. So much so, that I'm not even particular about eating it. I can read cookbooks to pass time. (We all read each other's blogs, don't we?) I think about meals (though I don't really plan ahead) and food combinations a great deal. I also wonder about food habits and how they come to be what they are. The other thing I wonder about is the "I'm a working girl and so I can't cook" syndrome. Now, I don't believe that cooking is a woman's job. But I also don't believe that a woman who goes to work cannot manage the kitchen. Maybe it was because of what I saw growing up. Amma had a full time job and yet she managed to cook breakfast, lunch and dinner everyday. Back then, "home delivery" and "take away" weren't exactly commonplace. And even if they were elsewhere in the city, the IIT campus allowed us no such luxury.
Life has fallen into a routine for most of us. And I am no exception. Cooking our meals is a part of that routine in my case. It irks me no end when I see young colleagues run into the office huffing and panting from barely 2 km away because they "had" to make lunch. I asked one such what the big deal was and she said, "I don't know how you manage to cook and reach in time. But I can't. I don't know why I am expected to. At my mother's place, education was given importance, not cooking." That usually does it. End of conversation. Because in a way, it is as though in my house, I was made to cook instead of study.
I think there are several issues here:

I hear things like, "Oh, we never cook in a pressure cooker. My mother is very particular about cooking things the right way." Excuse me! Who decides the right and wrong ways? I am also told, "You can get away with pasta and all that, my husband has to have rotis, rice, dal, vegetables and salad at every meal." I have not been able to understand how "I get away with pasta". But more importantly, even that entire meal is ready in less than 30 minutes in my kitchen. With some prior planning of course. I have been baking for 22 years and cooking for about 19 years now. Did it interfere with my education? Maybe it did. But it didn't stop me from being a gold medalist at University. Does it interfere now with my career? Maybe it does. But it hasn't stopped me from enjoying what I do for a living or giving it my very best. I have never thought of these as chores. On days when I really don't feel like cooking (and S is also knackered!!), we eat out. I don't fuss over our food or our mealtimes. I merely enjoy them. And there's every attempt to eat right. (Mangoes and icecream do make a meal, don't they?)

I baked a little cake today. I'm on cloud nine. Why, you ask? For a multitude of reasons. I got a raise and I got a bonus at work. But why would I talk about that here? This has to be about food, right? Yes, you're right. This is not only about food. This is about this very food blog. The Singing Chef was featured on Page 10 of this morning's Metro Plus, a supplement of The Hindu under

Food Bytes. I have not yet read the newspaper clipping, but my dear friend, Aarti, told me about it in the morning. Appa has kept aside a clipping and will show it to me when I meet him in May. I couldn't believe my eyes when I saw the internet edition. So, I made this fat free Passion Cake because I firmly believe that the proof of the passion is in the cake! 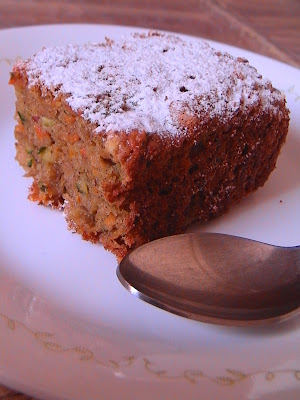 Preheat the oven to 180 C. Grease and line a square baking tin.

Sift the wheat flour along with the baking powder and cinnamon.

Beat the egg whites until stiff.

In a separate bowl, whisk the yolks along with the brown sugar, orange zest and almond powder. Fold in the flour mixture and the grated vegetables alternately. Fold in the egg whites carefully. Spoon the mixture into the cake tin and bake for 40-50 minutes. When done, sprinkle icing sugar through a sieve over the cake.

Cooking and baking aren't as tough as they're made out to be. I've said this before and I'll say it again. I'm about the laziest person you'll ever meet. So, if I'm saying these aren't tough, then you have no choice but to take my word for it. In the words of Peter Pan, "All you need is faith and trust... and a little bit of pixie dust!"

You make all valid points, Raaga. i think in our fight for equal rights, we sometimes forget to be who we are, and try to be who we think we ought to be. And 'ought to be' is again, different for all of us. Some of us may confuse 'feminity' with feminism, and that creates some problems.

To me feminism is about equal rights, and the freedom to be who we are. I proudly say I cook for my family, and like it! In fact, now even some of my clients have come to know that I have a food blog! Also, I have made it very clear to my family, that I am no super-woman. I may like to cook, but I don't like to clean the house; the duster rests in the husbands hands! More than fair, I suppose!

Congratulations on the mention in the Hindu! [A little birdie already tolf me!]

On yeah... totally agree on the cooking vs dusting kind of stuff... there are things I enjoy and there are those that I don't :-) Thanks

YAY YAY YAY Raaga...good for you. Am so pleased for you. Read your post in a hurry to get to the bottom of it; will now go & look online since we don't get the Hindu. Good for you girl! About the mths...may they RIP! If you have a passion for anything, just do it! It's when you fall into monotony that the caged feeling comes in...Life is fun; live it up!! Congrats on the raise too; looks like the merry month of May is working well for you. Drop by sometime. I'm still waiting to see you dear girl!! (9810208298)...:0)

Woohooo!!!! Celebrity girlfriend! I'm so excited for you! :) I'm sure you can't stop grinning! I thought it was quite well written! :) :) Very cool, dear! Way to go!

I came here as soon as I saw your "good news" even though it's Sunday and read the article. Wonderful surprise and am very very happy for you. Hugs little girl, enjoy the recognition. It does feel great!:))

u got the essence raaga, the point is to 'enjoy' it rather than explain it to someone how/why things hv to be done a certain way!!! loved the post :)
congrats on the mention!

Dear girl!! how i would like to smack all those in the face for inane and insane questions!! but its a pity that there are pig headed people who want to put tiny labels and compartmentalise everyone.....possibly makes them feel better that they have "figured everyone out" all i can say is.,....i have a life to live and sure dont want to waste it spending it all smacking people....congratulations on the article.....and the raise and the bonus!! that is something to celebrate about!! take a bow!!

That is sooo cool! Congrats on the article and all the fabulousness that is your life:)

Congrats dear raaga for all the things, the Hindu, the raise and for your passion.

First of all, congrats again girlie, I am sooooooooo proud of you, hope you got my email...

Secondly, my biggest pet peeve is the line "my husband will only have ... fill in the blanks here... " Jeez, if they are so particular, let them make it!! Someone actually told you you can "get away" with pasta??? The nerve of some people!!

Raaga, I am nodding my head in agreement while reading your post...but you can't help it, got to have a hard skin...I used to be really*****off earlier by such comments, but nowadays I pity those that have such mindsets :-D I love cooking and baking and love to be in the kitchen...and mind you, not because I have to...because I love to. Even when I worked in Gurgaon and the kids were much younger,I still cooked, and four out of six working days, managed to be the first to reach the workplace.

Don't think too much about it...enjoy your raise and the mention of your blog...I'm so pleased for you :-D

Congrats on the mention of your blog, Raaga! Thanks for sharing the cake. Looks delicious! :)

u cant imagine how excited i was wen i saw ur blog in the paper... :)way to go~~

Congratulations, Raaga.
Forget about those comments. Some people like to compartmentalise (is there a word like this?) everything. Mostly what one can do or not do has to do with mindset!!

Kudos Raaga. You deserve it all :)

Hey Raaga,
Just love to go through your website. Very very inspiring for person like me. I love the idea of baking but never gathered the guts. Recently tried a fruit cake and it was a success. Will surely attempt your recipes. Keep inspiring souls like me. Will keep you posted on my trials.

Hey Raaga,
Just love to go through your website. Very very inspiring for person like me. I love the idea of baking but never gathered the guts. Recently tried a fruit cake and it was a success. Will surely attempt your recipes. Keep inspiring souls like me. Will keep you posted on my trials.

I am honoured. I will wait to hear from you :-)