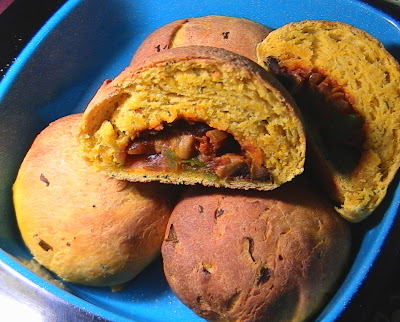 It had been ages since I made anything with yeast. I don't fear yeast that much anymore, but I do have to keep the weather in mind. I think I'm fairly certain now it is hot enough. We had a hailstorm earlier this week and it felt like February in April. I had a holiday yesterday and decided to make good use of it by starting my yeast baking for 2009. I was extremely happy with the results of my experiment. All 8 buns disappeared within 4 hours of my having made them. And there were only two of us at home.

Take a huge mixing bowl and place the oil, salt and sugar in it. Add boiling water and mix until the sugar dissolves. Add the milk now to bring the mixture to room temperature. Add the yeast and mix well. Add the flours, coriander leaves, turmeric and chilli powders and knead into a dough. Place the dough in a greased vessel and cover it with a damp muslin cloth. Allow to rise until double in size (roughly 45-50 minutes, though I guess it was cooler than I thought in Gurgaon, mine took 2 hours.)

Knead the dough for a minute and then divide into 8 equal portions.

Heat the oil and add the chopped onions and fry for a minute before adding the other capsicum. When the onion and capsicum are fried, add the mushroom, salt, chilli, turmeric and paneer tikka masala powders. Cover and cook for 4-5 minutes.

Take a portion of the dough and spread it on to your palm. Place some stuffing in the centre and bring the edges and seal. Place on a greased baking sheet or tray. Repeat with the other portions.

If you can make small buns out of this mixture, I'd say they would make a fantastic starter. What I really loved about these buns was the flavour. The stuffing was great and the bread was tasty too. Together, they were almost magical. I know I'll be making these more often.

I normally just read blogs silently, but this photo made me so happy I just had to post a comment. That sounds delicious. Do you think these buns would freeze well?

Hi Raaga, this looks so tempting...Can you also let me know which oven do you use...is it the microwave-oven or the OTG.. thank you

@Kelly: I'm honoured. Thanks. The ones I make never seem to last that long, but I am certain they'll freeze well.

@Supriya: I use a Samsung Microwave that comes with a convection, grill and combo.

@Arundathi: I'll tell you whole story someday... was telling Arundati yesterday that it almost seemed like I'd forgotten how to stuff the buns! Thanks though :)

I tried to ad some yeast to my appam maavu day before and though I tried three different packets - ALL of them failed to bubble up, so didn't risk using any of them finally. :(

I like your stuffed buns recipe Raaga. These lok tooooooooo good.

Thatz a nice looking bun, must be as tasty

You can drive Hot Breads out of business!

@Miri: I stopped using dry yeast when I was in class 4... after failed attempts at making fruit buns. I've stuck to fresh yeast.

@Divya, Prathibha and Deesha: Thanks :)

@Rashmi: Come on now...know anyone who'd pay to eat these?

Ahem..I would pay gladly and give those bakery-bought buns a miss if I had the chance!!Lovely buns Raaga..I made the coriander buns yday and my amma and bro were surprised;-).I see that you've increased the atta-ratio??Good good..next one to try on my list!!

that looks real tempting raaga..lovely buns..no wonder they got disappeared so fast!..:)

For all those seeking a first hand evidence of the taste: The buns were as tasty as they looked.

What more could you want!

oooh! wonderful. going to make this tomorrow. it has no eggs - perfect!

The buns look so good!

Me,me! and I assume so would lots of people looking for healthier, tastier,egg free alternatives

Finnished all the 8 in 4 hours, Tell me how many u had? They look really delicious!

Hey Raaga, thanks for that info dear. I have a Godrej Microwave Oven Grill. The only things we have baked are pasta and mexican rice with cheese coverings. You have am amazing range of recipes here that require baking. I am ardent follower of your blog and I love all the dishes that you have posted up to date. Cheers for all of them..:)

Ooooh, I'm bookmarking this one. Do you recommend a particular brand of paneer tikka masala?

I have so much to report about this amazing learning experience. It turned out fine, but did not feel like an AMAZING result. Also we needed to bake for 22 minutes, not 15. I also think we're going to try this again with NO filling to master the bun first. I think it didn't rise enough. This was an awesome recipe, thank you so much!!