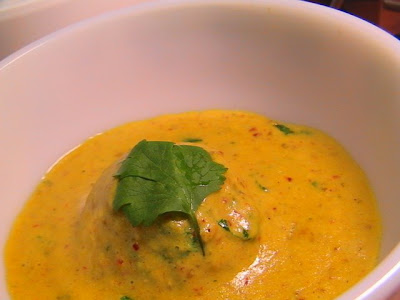 Kofta! For the longest time, I hunted for a good malai kofta. In fact, for a while, I ordered it each time we went to an Indian restaurant. For some reason, most places here serve malai kofta in a sweetish white gravy. The koftas always seem to have raisins in them. Now, I firmly believe that north indian food served in some restaurants in south india are just the way I like them. For instance, I love the chhole bhature you get at Shiv Sagar in Bangalore much more than what they serve at a Bikanerwala in Gurgaon. In fact, sometimes I crave "south indian style" north indian food. And no, I don't mean curry leaves laden gravies. There's this place that I went to called Verdhan (a Bangalore based chain) in Gurgaon. As always, I ordered malai kofta. I quickly checked what colour the gravy was. The guy said, 'Brown'. I was so thrilled. I haven't ordered malai kofta since even when we've been to Indian restaurants. I'll savour that taste for some time to come.

I decided to make some aloo kofta to take for lunch. Somehow, my colleagues didn't seem to know that such a dish even exists. They've only heard of malai kofta and lauki kofta. I've had both these and have also also had potato kofta. Since I very rarely make anything with potatoes and even more rarely fry food, this had to be a treat.

Grind the ingredients for the gravy in a mixer using a little water if necessary.

Heat a tablespoon of oil and add the ground paste. Fry this for a few minutes until the oil separates from the paste. Add the salt and fry for a minute. Add the milk and bring the mixture to a boil. Add the koftas and simmer for 4-5 minutes. Garnish with coriander leaves.

This recipe is a keeper. I remembered the recipe for the koftas from Amma's koftas. But I just went with whatever I could lay my hands on when it came to the gravy. It is a very rich and creamy dish that gives you the feeling of "rich food". Thank heavens it comes without that much guilt.

I'm sending this to Let's Go Nuts: Cashews, being hosted by Poornima of Tasty Treats.

Email ThisBlogThis!Share to TwitterShare to FacebookShare to Pinterest
Labels: cashew, potato, side dish

Last weekend, we went to Udupi restaurant here about 100miles away, they had really good Malai Koftas. Kids never like vegetarian restaurant but I convinced to get Malai Koftas which looks like Meatballs! :D

@Prathibha: I'd love to go to Shiv Sagar's and eat chhole bhature now :)

@Ashakka:Yeah... I make spaghetti meat balls with paneer balls :) so I can imagine :)

Do let me know how it turns out.

I have never had koftas with aloo. this looks nice

Made paneer kofta in the appam kuzhi some days ago and it came out well. Aloo kofta color looks good. The orange looks very nice. Will try the aloo version soon.

this gravy looks really nice and creamy - love it that it is so guilt free!

fantastic colour. i hate malai kofta for the same reasons you state. this looks just right.

i don't enjoy the cloying sweetness of standard malai koftas, so these look really good!
Sometimes,I also like the southie style north indian grub, esp biryani, but for cholay,i remain loyal to the spicy,oily, black dilli type stuff over the southern version;)

Yes Raaga, u can share the post on pondicherry for our RCI-Pondicherry. Looking forward for the URL..

Oh Raaga, that bowl with the kofta is rather inviting.

I love Malai Kofta. yours is a must try.

And Shiv Sagar rocks no? :D

Frying and time to put together put malai kofta puts me off too. Enjoy ur treat! Looks great!

I can't wait to get back home and try this.

so this the kofta u were talking abt. that looks delicious Raaga.
Kofta is Mughalai dish which is inspired by persian cooking where they use good dose of dried fruits. that's why most koftas have raisins, cashews or almonds in them as Mughals liked their food to be rich and creamy :) (read it in one of the online food articles)

Thanks everyone. I do hope you try this and let me know how you liked it.

Thanks for that piece of info Sia... at least I know why they put that stuff in :)

I would love to try this one, coz i have loads of aloo sitting pretty in my kitchen..

i must make this if i am anywhere close to the love i claim for K... he will be ecstatic!! i hate the sweetish gravies that come with koftas

Raaga, how many servings does this kofta recipe make?
Thanks, Anjali

Anjali: It was enough for 2 of us for lunch. With other dishes, it could be enough for 4.

my husband loves this dish. i know how you feel about ordering this in a restaruant...you never know what you'll get. Sometimes i get potato dumplings, sometimes mixed veggies. One time I got maida dumplings and even though they were really good, it wasn't what I had in mind. Kudos to you for making these for lunch!

Hi Raaga. Tried this recipe of yours yesterday with some alterations. I used curds instead of milk and I also added grated lauki to the potato kofta mixture.It turned out well.

Chefschatter team has found your blog to be very interesting and unique!

And so we invite you to become one of the authors of our website www.chefschatter.com which is the most exciting place for all innovative chefs out there!

Here you can not only post your new recipes but can also edit other recipes according to
your taste !!

Good Afternoon!!! chefatwork.blogspot.com is one of the best resourceful websites of its kind. I take advantage of reading it every day. I will be back.