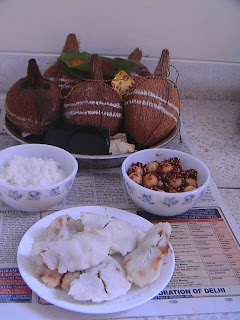 I celebrated Gowri Pooja today. After the one on my wedding day, this is my first Gowri Tritiya or Teyi.
A google search gave me this excerpt:
... religiously worship Goddess Gouri on the previous day of Shri Ganesh Chaturti, called Gouri Tritiya. It is essentially a worship by the married ladies, of course on their behalf male members assisted by priests, perform it, seeking the Mother’s grace and benedictions for progeny and also for longevity of the husband, usually called mangalya. Mother Gouri will have the offering of a good number of ornaments of course symbolically, besides a comb and bangles. There will be decorated coconuts called vayans and our ladies take special pain to prepare a basketful of offerings to Her. A special and a sacred thread called ‘vayan dara’ will be offered to Her which, will be worn by the ladies after pooja. And this will be changed only during the next year’s pooja after getting the new one. As soon as the pooja will be over the vayans will be gifted to the assembled ladies at the pooja starting with the mother-in-law. Interestingly the mother is always entitled to receive two vayans As the custom would have it, all are not celebrating this annual day unless the family has inherited this practice or custom from their elders. Wherever the custom prevails, the bride has to perform the first Gouri Pooja in the marriage hall itself, soon after the marriage ceremony is over, with 105 decorated vayans and the bride herself has to gift them away by touching the feet of elderly married ladies, seeking their blessings.

I was to have the pooja with a 100 coconuts today, but considering I barely know 20 people in all that I can give the vayan to. So, I'm going with five.

Traditionally, patolis or patolyo are made for Gowri Pooja by steaming a liquidy batter within a turmeric leaf. Vee has a complete pictorial here. I had neither banana leaves nor turmeric leaves available, so I decided to make steamed nevryo. 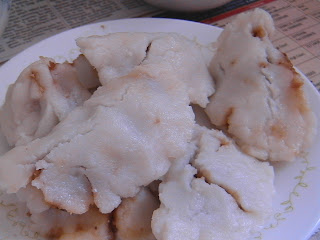 I made the stuffing the amchi way after referring to the book Rasachandrika.
Ingredients:

For the outer covering:

Bring the water to a boil in a heavy pan. Add the oil, salt and rice flour and stir well. Take off the flame and mix to a smooth dough like consistency. Cover and cool.

Toast the sesame seeds in a small pan. Add the coconut and jaggery and mix well. Take off the flame and add the cardamom. Keep aside.

Make small balls of the rice flour mixture and flatten it into a circle. Place some stuffing in the centre and fold over and seal the edges so you have a semi circle.

Steam in a pressure cooker without the weight for 3-4 minutes. 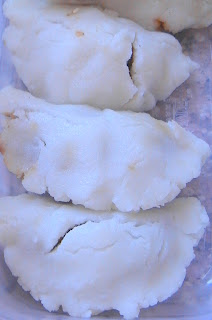 Since I had a problem with the covering dough, my patolis cracked and weren't exactly matching the visions I had of them. I didn't know what to do. I toyed with the idea of making open patolis on the lines of mini pizzas, but was too scared. So, I made something I was meaning to do for ages. 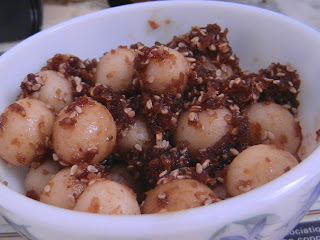 I remembered Laavanya's Ammini Kozhukattai. I made small balls out of my dough and steamed those. I mixed that with my poornu (stuffing) instead of her savoury seasoning.
I also made Narlya Kheeri for today's naivedyam. This is also known as Cheppi Kheeri (bland kheer) or Dhavi Kheeri (white kheer). It is traditionally made without any salt, especially today. But Amma always adds salt to this preparation. I was waiting for an opportunity to make this and today seemed perfect.

Cook the rice with plenty of water and the turmeric leaf. When cooked, add the coconut milk and salt to taste. 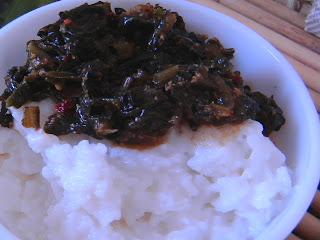 I made a simple spinach curry to go with this rice.

1 bunch Spinach, cooked and chopped
Grind to a paste:

For the tempering:
1 tsp Oil
1/4 tsp Mustard Seeds
1/4 tsp Asafoetida
7-8 Curry Leaves
Heat the oil in a kadhai. Add the mustard seeds and asafoetida. When the mustard splutters, add the curry leaves. Add the spinach and the masala and mix well. Cook for 5 minutes.
I finished my pooja before lunch and in the evening pulled out one of the sarees from my wedding that I'd never gotten a chance to drape. I wanted to release all my sarees in my first year of marriage and this was the last. (Just 4 days before we complete a year!) We went to our friend's place across the street for a pooja and dinner.

This also goes to dear Asha as yet another entry for the RCI Karnataka event. As Chavati (Ganesh Chaturthi) is never celebrated without celebrating Teyi (Gowri Tritiya), I am sending this to Latha for her Gowri Ganesh event.
Posted by Raaga on 9/14/2007

NIce.. we shall do all this tomorrow morning... :)

your patolis is similar to our kozhukataia, except we don't put sesame n cardomon pdr is an option(i am not too fond of it in this sweet,so don't add)... nice....

and i love those ammani kozhukatais.. just plain steamed n sometimes i add some idli podi and steam em,yummmy... :D

ur spinach is interesting...i make something similar but with tomatoes instead of tamarind..

Hi Raaga! never heard and all are very new recipes for me. But very interesting and looks great too. Thanks for sharing and happy chathurthi.

Happy Gowri Ganesha Pooja to you too, Raaga. You've prepared such a lavish spread!

@Aaroo: Thanks and same to you. Our specialty for Ganesh Chaturthi are the fried modaks and somashis

@Jyothi: This was my first time with all of this. I've almost always been at home for this festival so I've at best helped Amma. Wish you the same.

@Musical: Thanks. Hardly lavish in comparison to what is done at Amma's or her Amma's :-) But she was happy I even did it :-) (She knows how lazy I am)

Wishing you a happy Gowri Ganesh too.

It needs a real practice Raaga. When you keep trying, you will succeed one day. But you have taken the first step - to try. So, don't worry about the shape. Happy Festivals. Viji

Happy Gowri Ganesha habba sweetie.Love the dishes.Always need practice to learn the new dishes,you will get ,don't worry!:))
I will take the first photo and URL,so you don't have to send it.Have a great weekend.Thank you.

How are you??? Your Pooja tradition is something new to me....but interesting nonetheless!

hope you've been well...will be back regularly from now on!

wow !!
u have a wonderful collection girl !!!
nice blog will keep coming back

Happy Wedding Anniversary dear Raaga and a very Happy Chavati & Teyi to you and the hubby.

@Viji: Thanks. I tried again yesterday and they came out quite well.

@Roopa: Thanks and same to you.

@Ashakka: Thank and same to you. I suppose one does need practice. My chaklis came out perfect though... my first time :-)

@Trupti: Girl!!!! Missed you loads. Glad to see you on the scene again. Hugs.

@Mallurecipes: Welcome to my blog and I hope you'll keep coming back.

@Latha: I tried your uppu kozhukattais yesterday... came out perfect. Thanks to you and Laksh.

@Sandeepa: Thanks on all counts :-)

I keep on drooling over your pastry with sesame inside... Lovely! Back in my country (Vietnam), I have similar snacks, too.

You have a beautiful blog, and I will be back often...

nice to see the traditional dishes in here :)

Happy Gowri Ganesha Pooja to you!

hey you said you know only pet pooja!! good to know! wish you happiness:)

Though I knew dhavvu is white in Konkani, I didn;t know this kheer is called dhavi kheer too. (I knew it only as cheppi kheer)...Blogging teaches you so many new things. Your entire spread looks delicious.

Raaga, this looks so yummy..at least u experiment n succeed n get more ideas! Loved those patholis, low cal may v call it? The Kozhukattai..good idea to use chuna outside! Cheppi kheer has its own goodness --vaayna, all the yummies make me sooo nostalgic abt Amma!