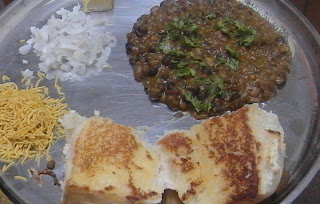 I was born in Bombay and have spent countless summers there. Amma was an out and out and Bombay girl until a few years ago when she, maybe because of my influence, became a hard-core Madras ponnu. As with any city, you can take a person out of Bombay, but you can't take Bombay out of a person. Mother and daughter enjoy doing things together in Bombay even today. Drinking sugarcane juice in Matunga, eating Pav Bhaji in Vile Parle, Pani Puri at KP, or Vada Pav near Churchgate. I, on my own, have done a lot more street eating than even some of my cousins who have lived there all their lives. I can tell you where in Nariman Point you get the best Sev Puri and where to go for the best dosas. I suffer from GERS and IBS and have not let any of this affect my eating habits. I am careful where I have to be and carefree at others, but never careless about what, how much and where I eat.

I'd never eaten Usal Pav in Bombay. The first time I had it was in Baroda, at a local joint. Misal, I'd had when my friend Prajakta's dad made it for me in Madras. But a few years ago, my aunt (yet another amazing cook)made Usal Pav with the help of her neighbour for me when I was visiting. (Of all the 14 grandchildren in the house, I'm the youngest but the least finicky about food. That means that all aunts have wanted to make things for me, because they always knew I'd eat without a fuss. Spice, I cannot tolerate beyond a point, but, that apart, I've always been a good girl!)
I was then visiting Bombay from Hyderabad and my aunt gave me a packet of Usal mix. I never used it. I didn't have the heart to open it and try my hand at it. The packet went with me from Bombay to Hyderabad and then to Bangalore before it travelled yet again with my stuff to Gurgaon. I'd been meaning to make Pav Bhaji for ages now, and then I found this packet of Usal mix. Still good after all these years. I chucked the Pav Bhaji idea and settled for Usal Pav. This was going to be my big day. 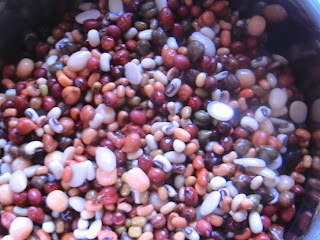 The packet contained 7 types of lentils. Moong, Matki, Green Chana, Brown Chana, Chawli, Vaal, Vatana. I made a quick call to my mami and asked her how to proceed. She told me I could use any number of mixed lentils and didn't have to rely on a packet of Usal mix. 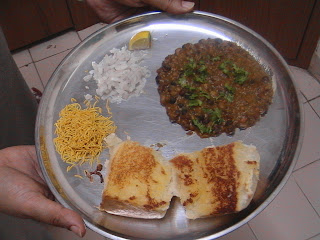 Heat 1 tsp of oil in a kadhai and fry the onions. When the onions turn brown, add 1-2 pods of garlic, chopped. Add the ginger-chilli-garlic paste and fry for 2-3 minutes. Cool this mixture and grind to a fine paste.

Heat the remaining oil. Add the remaining garlic and fry for a minute. Add the ground paste and fry until the oil separates from the paste. Add the turmeric powder, chilli powder and garam masala. Add the chopped tomatoes and fry for 2 minutes. Add plenty of water and salt. Add the cooked lentils and simmer for 10-15 minutes. Mash the mixture a little and add some chopped coriander leaves if you like.

Slit each pav in the centre and smear some butter on the cut surface. Toast on a hot tava untl the sides are brown.

Serve the usal in a bowl. Sprinkle the onions, coriander and sev over this. Serve with toasted pav and lime wedges. (I served everything separately because that way people could mix and match the amount of onions and sev on their own.)

Once the lentils have been soaked, the entire dish doesn't take more than 20-25 minutes to put together. So, this goes to Mallugirl’s Express Cooking challenge.

usal mix.. sounds new to me. i too loved the street food in bombay.it's for the fast and furious, right? so how do u manage with ur commute!