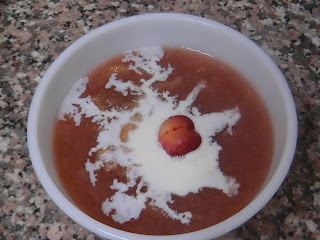 My cousin lived in Coonoor, Nilgiris, for a long time. She's one of the most enthusiastic cooks I have met. By self admission, she's also lazy. (Do I see an older version of myself??) During one trip of ours, I remember we bought an assortment of fruits and brought them home. She made this stew with pears, plums, peaches, pineapples and apples and served it with fresh cream. I made it several times since I learnt it, but hadn't made it in years.

Summer is all about fruits, isn't it? I just love the peaches, pears, cherries, apricots and litchis that wrestle for space along with the mangoes. I'd picked up a kilo of cherries to make cherry ice cream for Meeta's Monthly Mingle, but thanks to the burglary, they just got ignored. I also bought some plums last weekend that were extremely sour. So, I decided that they were all going into the stew.

My cousin used to peel and stone all the fruits before putting them in the stew. I need as much fibre as I can lay my hands on and put the fruits in as they were. I told S that we could have a spitting contest later on for the seeds. 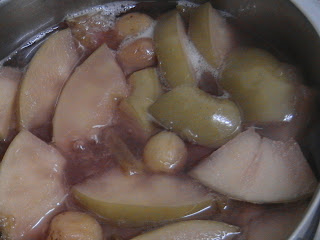 In a large vessel, I added the fruits along with the sugar and enough water to cover the fruits. I allowed this mixture to boil until the fruits became soft. I mashed this mixture with a potato masher and somehow got the seeds out. (I wasn't planning on doing this, but when they all came out sans the flesh, I decided to remove the seeds and ditch the contest.) 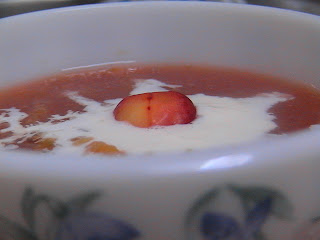 I served this with some cream. The next time, I'm going to add all my fruits. There are beautiful pears and peaches out there that would impart a lovely flavour to the stew.

Raaga you are on a posting spree :)))
All your dishes are nice, fruit stew , dosa, sambhar, bread upma, potato curry and usal pav.
Fruit stew is new I would love to try it. I believe the ultra grinder grinds well. My friend is very happy using it. So start using it :)She used to grind it and leave it to ferment in the same vessel.So no cleaning of the container.
You have made me nostalgic by writing about Coonoor. I stayed very very close to it for one year.Now this is more than 10 years back.
The upper Coonoor and lower Coonoor my what a lovely place that was. We used to go for shopping to Lower Coonoor and I remember the smell of sambhar powder being grounded in the local chakkis and coffee smell too. To top it all tamil songs were played loudly in the market.
You have written about Mumbai. Now tell me seriously where do you get sev puri at Nariman point? Is it those stalls close to Status restaurant ?Also where do you get good pav bhaji at Nariman Point or till Churchgate area ?
Enjoyed reading all your posts :)

Fruit stew. Thats news to me. More like fruit payasam.

@Archana: Were you at Wellington? The aromas that bring back memories... amazing.

Sev Puri at Nariman Point: Catch the guy in front of Chander Mukhi/Sakhar Bhavan. His green chilli chutney is something to die for.

You reminded me of Status. I want that thali now :-)

My personal favourite for Pav Bhaji is in VileParle Market. Shiv Sagar I think the name is... never bothered about the name... just gone there to eat!

@Suganya: We had it with a little condensed milk and it was really like payasam!