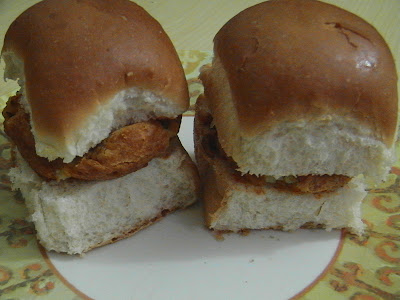 The Indian Burger! That would best describe the Vada Pav. I don't remember when I ate my first vada pav. My strongest memory of the batata vadas dates back to the late seventies. As the Dadar Express pulled into Karjat, Amma would start looking out of the window. Somewhere amidst the Kedbari, Feystar, Jings ( Cadbury's, Five Star, Gems) she'd find a Batata Vada vendor and call him. They'd talk in marathi (and we didn't understand a word) and at the end of the conversation we'd have a newspaper with 6 vadas, some garlic chutney and a few green chillies. Every year, we looked forward to this moment. Finger licking goodness!

I got hooked to the Vada Pav much later. I tried several different vendors until I figured this guy outside the LIC building on my way to the station from Nariman Point dished out the best vada pav. I wasn't that keen on making the stuff at home, so I didn't pay attention to his chutney. (When you got it for 2.75 a piece, why would you bother?) I tried it at home years later. It wasn't as good as his, but it was definitely good.

For the Filling:
3-4 Potatoes, boiled, peeled and cubed

Mash the potatoes and add the salt, chilli and ginger-garlic pastes, and coriander leaves. Make small balls and keep aside.

Mix all the ingredients for the batter. Add enough water to make a thick batter.

Heat the oil in a kadhai. Dip the potato balls in the gram flour batter and drop carefully into the oil. Deep fry the batata vadas until they turn golden brown all around. Drain on absorbent paper.

Grind together all the ingredients for the chutney. Slit each pav horizontally (not all the way) and spread some chutney. Place a batata vada over the chutney and enjoy your snack.

P.S. S had a new version of vada pav at the Mumbai airport recently. He said the vada was baked int the bun. A little more time consuming I'm sure, but he says it is a very non messy way to enjoy the snack. With all this baking going on, can I say no?

YUM YUM!! I have never tasted this from the street cart but made at home here. Loved it so much, specially the spicy chutney. I will try this in June! :)

This recipe just speaks to me! Vada pav is such a classic street snack and this brings back lots of great memories. They look lovely, Raaga.

Oh, that vada pav picture is teasing me. I wish I could just walk down the street and pack some for me and gobble it without sharing with anyone!!:-D
fantastic picture!!

Love vada pav.Never tried at home.Thanks for the recipe :)

mmm, this is more of a Indian and authentic vada pav... A great snack idea and guests will be bowled by this for sure... Good one..

Lovely vada pav..I am really enjoying this food in mumbai..

Never tasted in roadside, I only learned after coming to US. I like the spicy chutney!

Looks comforting and filling! :D
Thanks for sharing the recipe dear, have never tried it! :)

yes oh yes vada pav is my comfort food for sure..........honestly there is nothing more tantalizing in the world to me than the smell of vadas being deepfried.............

Yet another delicious recipe, and a great way to use potatoes! Thank you!

I had my first taste of vada pav on a train too on the way to Goa and I still relish that.

The LIC guy was definitely good! and the best batata vada EVAH had to be the Chhabildas Gully guy in BB Dadar. Drool drool :)

Wow, this brings back so many memories.. I think I ate his vada pav every day for 5 years while in college. Does anyone know where he has moved since. I've been trying to find him.