You know how you come up with an idea. Then suddenly you find that that idea sort of takes over your life. And then you either lose sleep over it or you start dreaming about it the minute you fall asleep. I wish I could say this about my ambitions in life. At this point, I am only able to say that about food. 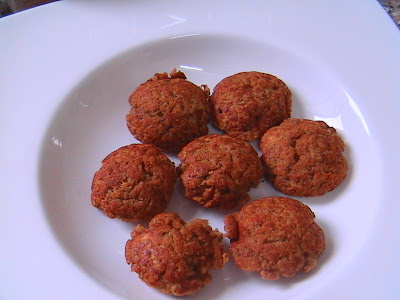 I’d been meaning to make chhole for ages. And the reason that I wanted to make it was not the craving for chhole or any such thing. It was so that I could make kababs from the leftovers. S was content eating the chhole as it was, but I stopped him on day three to make these little beauties. We argued a bit about why I had to turn the chhole into something else when it was perfectly good and was being consumed as is. I finally told him, “This is what I want to do with it. I’ve been dreaming about it. If it works well, you’ll love it.” He couldn’t say much about it. And the best part was that we both loved it. 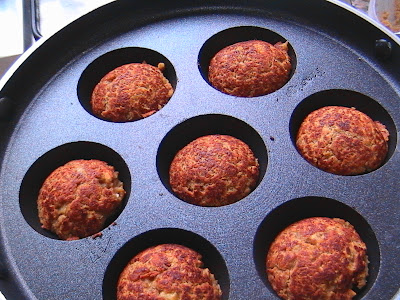 Mash the chhole or puree it in a mixer. Add the bread slices and crumble them into this mixture. Add salt and chilli powder to taste. Make small balls and cook them in a lightly greased “Appey Kayli”. (You could also flatten the balls slightly and shallow fry them on a griddle.) Cook on each side for a couple of minutes. Serve with green chutney or tomato ketchup.


Since I used a non stick pan, I had low fat kababs. The oil that went into the chhole was the only oil in these. I will try this with different leftovers (like rajma) and share my success stories with you.

Hi Raaga
This is my first visit.You have a wonderful blog and the kababs are great.I'll be a regular visitor from now on.Happy to know u r from Madras too

Very good idea to make kababs in the appe pan...i use leftover chole to make parathas, but pureeing leftover chole and then adding reqd amount of atta to make a dough. That's it...all the spices are already in the chole...Try it for breakfast sometime, or you can take it in dabba also :)
I will try out your kababs on a tava, cannot buy another pan now, my cabinets are already stuffed.

I must admit this is a new dish for me.

thanks for the recipe, i always have chole left over.

what a super idea to make kababs in an appey chatti!! full of protein ....superb!!

Beautiful color and very creative Raaga, love the idea of using Chole! Have a great weekend. Don't forget to visit me too!;D

Look at you! How innovative, Raaga! I totally know what you mean about not being able to sleep until you complete your idea. I've had those moments too! :)

I completely identify with your intro para. Even I do that, and v often go to bed excited about some dish I'm going to achieve the next day. Cookbooks also make for some excellent bedtime reading, did you notice that?

Oh wow, kababs with chole, now that's one thing I could have never thought of...no wonder you were losing sleep over it Raaga :) They look great.

What a neat way to use up leftovers!:)

Thanks all... I am definitely going to try this with rajma... we're thinking tonight as there is some rajma in the fridge.

Nandita: I do remember your parathas... you sent them to a WBB... your own I think.

Sra: All my reading is down to cookbook reading these days :-)

Easy: that's 4 reasons for you to try this!!

This recipe looks good - I am not familiar with “Appey Kayli” - is that like a muffin pan? Do you bake them in the oven?

That is a very creative recipe... way to go Raaga! I have been seeing so many uses of the appey pan lately, I am so tempted to buy one... but I have way too many pots and pans in my small kitchen already... :(