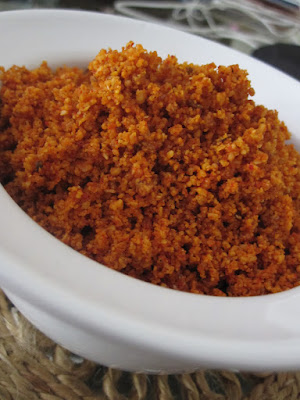 When I was relatively new to the world of blogging, I didn't know too many people. I thought that participation in events was only by invitation. I felt like an outsider. I read about people receiving gifts from other bloggers and wondered how much longer it might be before I would be considered part of the "inner circle".

I then realized that there was no such thing. Most bloggers considered all other bloggers as being in the inner circle. Friendships were formed quickly and before I knew it, I received a lovely package in the email. A letter, some methkut, some murabba, some tea bags, an agarbatti holder and this little bottle of "Sesamum Chutney". The sender was Nandita!
S and I were hooked on to this Sesamum Chutney and we savoured even the last speck from the bottle. We ate it with everything. Sprinkled it on buttered toast, ate it with chapattis, had it with dosais and even mixed it with hot rice.
I tried to recreate the chutney at home nearly 5 years after I had received the parcel. It turned out quite similar to the original and I will be making this so often.
6 Garlic Pods
1 cup Peanuts, roasted and skin removed
1/2 cup Sesame Seeds, roasted
2 tbsp Cumin, roasted
2 tbsp Red Chilli Powder
Salt to taste
1 tbsp Oil
Grind the ingredients (except the oil) together. Add the oil a few drops at a time during the grinding. The oil keeps the entire mixture from becoming lumpy.
This is a very versatile chutney that can be used in many ways. You could also mix some in a bowl of yogurt for a quick raita. I am certain it will go very well even as a spice mix for vegetables. I must try that next.
Posted by Raaga on 8/28/2012

Love your version of peanut podi. Thanks for the recipe.

Oh, treats from other bloggers are the best! I've been introduced to so many wonderful foods that way. This chutney looks incredible. I make a version with a bit of dried coconut too.

Very nice.. must be yummy for dosa :)

The ingredients are the same as in my sesame-peanut chutney yet I can tell they are completely different in taste! The proportions are different as is the texture. Love the bright colour!