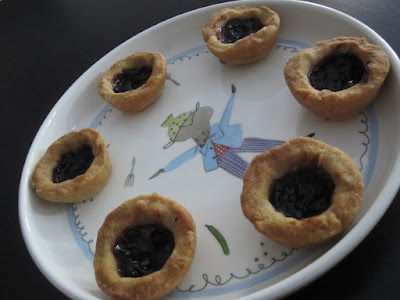 I woke up last morning thinking, "Oh dear! Oh dear! I shall be too late!"
I was running very late for a tea party. One whose deadline had been extended partly at my request. Could I blame it on jetlag? Could I blame it on two festivals that are very important to me that I absolutely had to prepare for? Could I simply say I forgot? No.

I knew I had to do something about it. I just didn't know what.


'I'm sure I'll take you with pleasure!' the Queen said.
'Twopence a week, and jam every other day.'
Alice couldn't help laughing, as she said,
'I don't want you to hire ME - and I don't care for jam.'
'It's very good jam,' said the Queen.
'Well, I don't want any TO-DAY, at any rate.'
'You couldn't have it if you DID want it,' the Queen said.
'The rule is, jam to-morrow and jam yesterday - but never jam to-day.'
'It MUST come sometimes to "jam to-day,"' Alice objected.
'No, it can't,' said the Queen.
'It's jam every OTHER day: to-day isn't any OTHER day, you know.'
'I don't understand you,' said Alice. 'It's dreadfully confusing!'


Have I confused you enough? There was a time when I thought about mad people in third person. Now I know enough to talk about them in first person.


“Do you think I've gone round the bend?"
"I'm afraid so. You're mad, bonkers, completely off your head.


But I'll tell you a secret. All the best people are.”

Alice, oops Anita, invited us to a Mad Tea Party. I had attended a couple of these in the past. Just around the time when I realized that, I, like everyone else, was a bit mad. But what would I do at a tea party? I, the one that doesn't even drink tea that much.
“Take some more tea," the March Hare said to Alice, very earnestly.
"I've had nothing yet," Alice replied in an offended tone, "so I can't take more."
"You mean you can't take less," said the Hatter: "it's very easy to take more than nothing."
"Nobody asked your opinion," said Alice.”
The writing was everywhere. I simply had to attend this tea party and since today is not just any other day, I decided to make jam tartlets.
For the pastry:


Place the flours, salt and butter in a bowl and mix together till the mixture resembles small peas. Gradually add the water and knead gently till it forms a dough. (Do not knead as you would for chapati/poori dough.) Roll out the dough and stamp out circles.


For the filling:
3 tbsp Jam

Prepare a mini muffin pan by greasing it a little. I used a non stick mini mufifn pan.


Place the pastry circles in the muffin moulds. Spoon 1/2 tsp of jam into each mould. Bake for 20 minutes. Allow the tartlets to cool a bit.﻿ 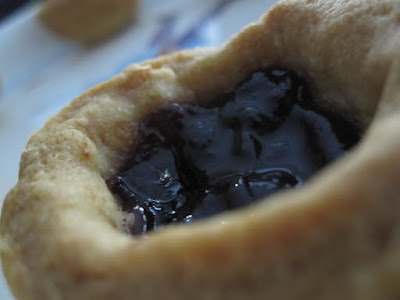 Sit down with a cup of tea or coffee, serve yourself some tarts and have yourself a party. Remember:
“Yes, that's it! Said the Hatter with a sigh, it's always tea time.”
Posted by Raaga on 9/22/2012

I love jam tarts and these look so good.

Ahhh! More jam tarts! That's what I brought to the party too!
It is always tea time and these are a great accompaniment!
Thanks for coming to the Party, Raaga, and bringing another dose of madness!

Nice little space you have ctreated .. glad to follow you :)

Do visit mine for some pleasent exchanges :)