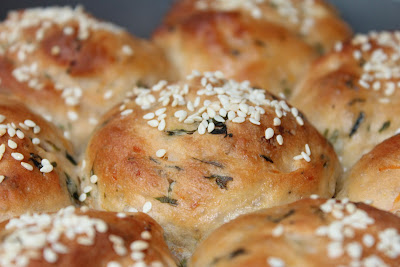 The scars left by my "Fruit Bun" baking episode in 1986 have long disappeared. I have not forgotten the episode, but I have simply moved on. After all, in 5 years, Mr. Yeast and I have become fast friends. I now have access to good quality yeast that doesn't need freezing and thawing. Since baking the coriander cream cheese pinwheels, I made another batch of khara buns and cinnamon rolls. The recipe for the cinnamon rolls will come soon.

Little A loved the cinnamon rolls and that is when I realized that I could make a wide variety of buns, especially for him. He is at a stage where he wants to feed himself. So, I decided to make buns for him that could be considered a full meal. Carbohydrates, fats, proteins and vegetables. These buns were the result of my experiment. You could substitute half of the flour with whole wheat flour
as well.

Take a huge mixing bowl and place the oil, salt and sugar in it. Add boiling water and mix until the sugar dissolves. Add the milk now to bring the mixture to room temperature. Add the yeast and mix well. Add the mixed vegetables, butter beans, coriander, chilli and ginger. Add the flour and knead into a dough. Place the dough in a greased vessel and cover it with a damp muslin cloth. Allow to rise until double in size (roughly 45-50 minutes).
Divide the dough into 16 balls. Place in a buttered baking tin. (I used two 8" cake tins and placed 8 balls of dough in each.) Sprinkle the sesame seeds on top and allow to rise for another hour.
Preheat the oven to 400F/200C.

Bake the buns for 12-15 minutes. Brush with a little butter or oil if you like when the buns come out from the oven.
﻿
﻿ 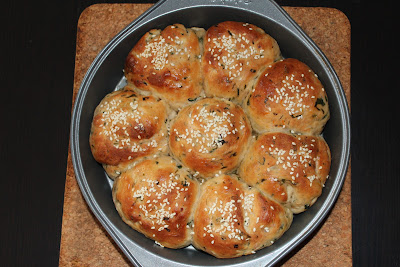 I did really make these for A. But given that they were so tempting, we quickly ate two each ourselves. Soft and full of flavour. These buns, while not spicy like Khara Buns, have a similar flavour. The butter beans and the vegetables up nutrition content. And that little A ate two of these, quite simply, made my day.
﻿
Posted by Raaga on 8/06/2012

wow , these buns looks perfect. My weekend experiment is going to be buns, will refer this :)

Quite the avid baker now! These turned out really well. I think it is time to crank up the oven and bake buns instead of making roti!