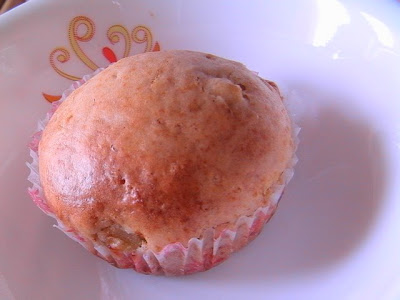 We rarely ever have visitors. One Sunday morning, a fellow blogger dropped by for a visit. We happen to live in the same complex and after a couple of phone calls, we had an impromptu meeting. I had nothing at all to offer her or her cute two-year old. I made these muffins in a hurry. I messed up a little while mixing the batter, but the muffins turned out just fine. Although I made these for the little one, I felt that the cinnamon made them very adult-like, and that maybe vanilla might have been a better option. Swapna told me that her daughter ate an entire muffin and also added that that was a big deal. So, I think I may have a keeper recipe here even if I just threw in everything I could find.


Mix milk, oil, cinnamon and egg in a large bowl until well blended. Stir in the remaining ingredients. Mix only until moistened. Fill muffin cups. Bake 15 to 20 minutes or until wooden pick inserted in center comes out clean.

Hey,
ABout eggs - we don't cook with them because Arnav's very allergic to them. --Deepa

I love eating muffins and by seeing your pic of muffin i am craving more:)

Hey Deepa: If you get egg replacers, I think you could try them... In fact I made these muffins with the Ogran Egg Replacer. No change in texture etc. Quite nice. I keep the egg replacer ready as there are times when I have to make eggless cakes. :)

@Preety: Shall I send you some?

I see you are on a diet! Salads, soups and low cal dishes mostly:)! I love the flavor of cinnamon so your muffins look perfect for my appetite! Wish you a very Happy 2009!

The muffin looks yum. I have never tried making muffins with oil, so plan to try these soon!