I hadn't been blogging regularly, but I had been cooking. I was mostly cooking the same stuff that I'd already blogged about. When I did make new stuff, I forgot to take pictures. When I did take pictures, I forgot to load them to my laptop. And when I did load them to my laptop, I figured I didn't have the time to blog after all. Now since some of you have been missing my posts and have urged me and encouraged me to start posting again, I feel totally enthusiastic about writing here again. Who knows, I may be a regular after all!
I had a recent mishap in the kitchen when something I was frying exploded in my face as I was trying to turn it over. Fortunately, in addition to a proficiency badge in Cooking, I also hold one each in Firs Aid and Ambulance Man (slightly more advanced than First Aid). And more fortunately, S is a clinical pharmacologist and knew exactly what medication to use. A week ago, my face was part burnt and I had a series of burn marks on my face. Today I am much better and about 95% of the scabs that formed on the burns have fallen off.
Now, I shall share with you some of the things I've been cooking from your blogs. 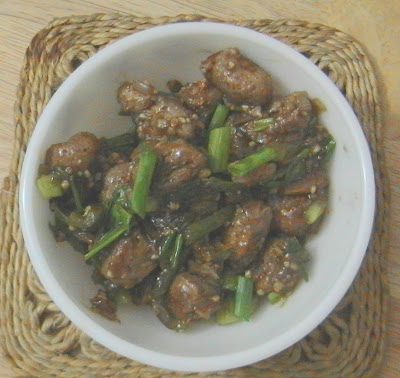 There's this lady we all know. She lives in a cold and rainy port town with a beautiful view of the port and the mountains. While she shares pictures of lovely Seattle, she also puts up some very classy pictures that can make you drool. I don't cook any meat and yet when I look at the pictures she puts up, I feel I absolutely have to try them out. I bought a packet of fake chicken legs and I will try some of her chicken recipes soon. I had planned to recreate Sig's Chilli Chicken with paneer, but I decided to make it with Soya chunks. I followed her recipe for most part. I omitted the tomato ketchup and added some cornflour mixed in water to the dish. It was so tasty that I ate most of it from the pan. Thanks Sig, this is a keeper recipe. 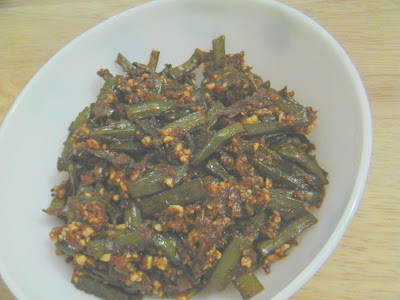 I talk with great pride about adding new vegetables to my repertoire and one such vegetable is the very humble cluster bean. Last year, just as the season for these vegetables passed us Delhi/NCR folks by, Anita put up this wonderful recipe. I never did care much for these beans, but her pictures made me want to eat it right then. This year as soon as the beans came into season, I asked Anita if I could pick up a small amount of the Goda masala she'd made, as by her own admission, it would make or break that dish. She graciously agreed and handed it to me when we met briefly in August. It just so happened that I never seemed to find tender cluster beans. When I finally did, I made it for dinner when S was returning from one more of his trips. I can't tell you all what a comforting meal it was. Thanks Anita. The recipe and the masala are both much appreciated and I'm forever grateful. 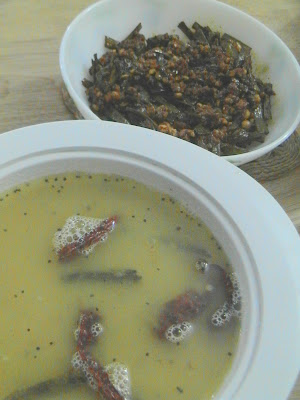 I served the nutty cluster beans with some varan-bhaat. I started following Nupur's recipe as it seemed closest to the varan Amma used to make when we were kids. But I got distracted while adding the curry leaves and ended up with a tempering of mustard, red chillies and curry leaves. So I ended up with a cross between Dali-saar and Varan. No one was really complaining. Thanks Nupur. 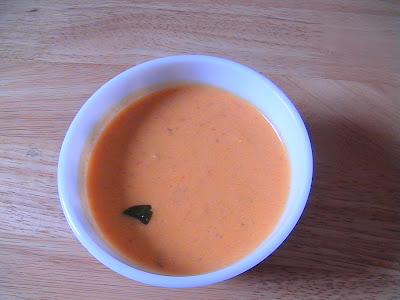 My namesake, Arundathi, took some of this stuff to the Chennai food bloggers' meet. I thought it was normal mor kuzhambu with tomatoes instead of ash gourd. Then when we were discussing a party menu, she decided to make this again. I was intrigued. Though I never did ask her even once how this dish was made, I waited for her to post her recipe. I made it that very weekend. And it was a hit. S declared it "the best yogurt based dish I'd ever made. We had it with rice and vazhaikkai karumadhu just as we would have had normal mor kuzhambu (even with some yelai paruppu on the side). The next day, I made some instant idiappam and we had those for breakfast with the leftover tomato mor kuzhambu. I know, now, why she considers such a great party dish. It is bound to be a hit. The colour of this dish and the flavours are so nice that everyone will end up licking their fingers, plates and bowls. Thanks Anu.

nice collection of recipes you have tried raaga...hope your burns are much better now..

I'm glad you loved the more kozhambu. I hope you're feeling better now!

I am regular visitor and I love your simple and quick meals a lot. Hope you get well soon. may God be with you.

hope your burns are better now... take care and careful in the kitchen... :)

Hope you are doing well now Raaga. Be careful.
When I saw chilli chicken link(before reading the post) I was a bit confused. Then I read about fake chicken :).
I have tried the beans dish and it is yumm..

Raaga...hope u re better now, take good care...also be cautious from next time onwards....always be at one arm length distance while frying....it might look funny to others but ...:)

sorry to hear about the cooking accident, hope you recover 100% soon.Take care.
Nice bunch of recipes you tried out there:)

take care of yourself....glad you are recovering!

Sorry to hear about your kitchen mishap. Hope you recover fully soon.

Sorry to hear about your little accident in the kitchen. You be careful now!
Take care.

Raaga, thank goodness you werent hurt badly! I'm so glad you're better now. No wonder you've been silent for so long!

All the dishes look so delicious.

Thank you all for your messages. I am much better now. The last of the scabs, the one over the biggest burn, fell off too. So, my face shows almost no sign of my trauma of the last 10 days. I don't normally deep fry and when I do, I'm very careful. But I will be even more careful in the future.

Sorry to hear about your accident! and glad you are better now.
Will have to try your selections - I am really intrigues by that kuzambhu... Those cluster beans surprised me too - that I finally liked them!

Please take care! I hope and pray such things never happen again to you or to anyonelese ever ever again. God be with you.

Oh no, that sounds terrible! Hope you are feeling better now sweetheart... Glad you liked the (fake) chili chicken...