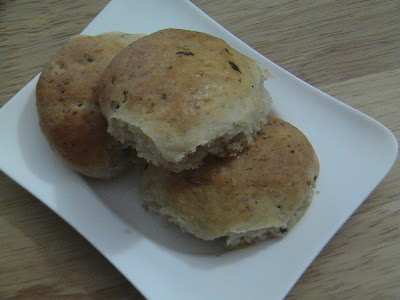 I hadn't made buns in ages. I tell myself that they're easy to make, tasty, healthy, nutritious. Isn't that list enough? Somehow I didn't get around to baking them until recently. And nothing turned out the way I'd planned or expected. It was a rather disastrous experience. While I was getting the dough for the buns ready, I decided I didn't want to bother stuffing them. So I mashed the potato I'd cooked and put it into the dough. As I was doing this, the milk that S had put to boil started to break. So, I quickly squeezed some lime juice and turned it into paneer. I had no idea what to do with the paneer, so I just added it to my dough. The end result wasn't great because it didn't turn out the way I'd pictured it in my mind. (Never mind that the changes I made were too many!) The buns were tasty and soft. In the end, that's all that matters.

Take a huge mixing bowl and place the oil, salt and sugar in it. Add boiling water and mix until the sugar dissolves. Add the milk now to bring the mixture to room temperature. Add the yeast and mix well. Add the flour, the potato, coriander leaves and paneer, cumin powder and chilli paste and knead into dough. Place the dough in a greased vessel and cover it with a damp muslin cloth. Allow to rise until double in size (roughly 45-50 minutes). The resulting dough will be very sticky and you will need to have to some flour to use while kneading.

Knead the dough for a minute and then divide into 10 equal portions.

Preheat the oven to 400F.
Take a portion of the dough and shape it into a bun. Sprinkle some cumin seeds over the buns and place on a greased baking sheet or tray. Repeat with the other portions. Allow to rise for 50-60 minutes and then bake for 12-15 minutes. 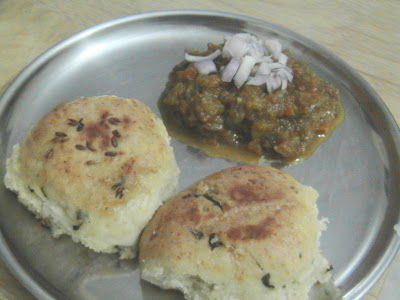 We had these buns in several ways. I also toasted them with a little butter, recycled the morning's mixed vegetable using some pav bhaji masala and had a dinner of aromatic pav bhaji. Heavenly street food, right on my dining table. And for a change, even the "pav" was home made. Am I happy or am I happy?
Off this goes to Zorra @ 1x umruhren bitte for World Bread Day.
Posted by Raaga on 10/17/2008

so basically you just winged it...looks good....why would it not! it has paneer in it...yummm....

Thanks for sharing the recipe. I like the feeling of a pav - it is a bun, yet so much a home food kinda stuff.

Where have you been.I have not seen you blogging in a while. Very nice buns. I will give these a try soon.

That`s how it happens in the kitchen. An easy looking task sometimes seems so difficult when things do not fall in place. Intelligent use of the paneer in the bread.

sounds pretty interesting, and it did turn out well:)D

Nice buns! Indeed taste is all that matters. ;-)

Thx for your participation in WBD'08.