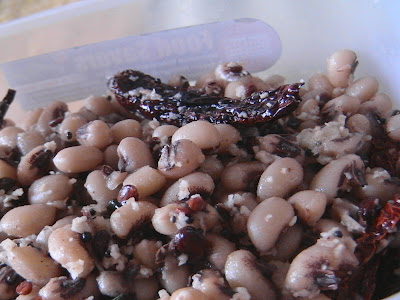 Navaratri and Sundal are sort of synonymous. For me at least. One of my colleagues, D, loves sundal of any kind as she says it reminds her of her childhood in neighbouring Faridabad where a Tamilian neighbour invited her over every year for Golu. What are the chances that a very Punjabi young lady from Faridabad has memories of a dish that is so very Tamilian? It is something that I took for granted all my life. But when I see folks around me and think back about my childhood, I know that what I had was special. I can't believe that at one point, I thought everybody had parents who spoke different languages and that a different language is spoken in each house.


I come from a multicultural family. My extended family has representatives from almost all over India and some parts of the world as well. I understand many traditions. I may not know why someone follows a particular tradition, but I am aware that they do. For years, the grandmother of a Punjabi friend invited me during the Navaratri Ashtami for the Kanchak Pooja. I loved the poori-halwa-chana I got, not to mention the thrill of getting a red chunni and some money. Year after year, we got sandesh from our Bengali neighbours around Durga Pooja. And at Ganesh Chaturthi, our Kashmiri neighbours would send us Roth and some walnuts soaked in water. And I remember decorating Easter eggs with a German neighbour. One street with 18 houses had people from different states (not to forget some foreigners) and our entire campus must have had every state represented. Yet, people tell me I grew up in narrow minded, conservative, orthodox Madras.


Most people I meet these days grow up in what I would consider uni-cultural environments. And I find I have limited tolerance for people who know absolutely nothing about other cultures and talk like experts. How would you deal with this situation?


M: What did you eat for breakfast?
Raaga: I had Dosas.
M: For breakfast??? Come on yaar, dosa is a dinner item.


I told her that it was quite the same way that Aloo Parathas are eaten for breakfast in her house. Coming back to Navaratri and sundal, the only reason I can think of to postpone making sundal would be that one does not have presoaked beans. Black eyed beans, a.k.a. karamani/chawli/lobia, helps you work around this reason as well. As I discovered last year, these beans need no soaking. I pressure cook them directly and that gives them just the right amount of softness. I woke up on the first day of Navaratri this year and wanted to make sundal. I had not soaked any beans the previous night. I had some soaked and cooked legumes in the freezer. I didn’t feel like using them as I feared they had become too mushy for sundal. So I decided to make it with Karamani. On the first day of Navaratri, I made this and we ate it in the car on the way to a college for campus recruitment.

Pressure cook the beans with salt for 4-5 whistles. Drain when done. In a kadhai, heat oil. Add the urad and chana dals, mustard seeds and asafoetida. When the mustard splutters, add the curry leaves, ginger and chilli pastes, and the red chilli. Fry for a minute. Add the cooked beans, and a little salt. Cover and cook 4-5 minutes. Garnish with the scraped coconut and enjoy.

I hope all of you had a nice Navaratri. Wishing everyone here a very Happy Vijayadashami.
Posted by Raaga on 10/08/2008

A recipe right in time for the festive season..Looks simple to make.

Very nice... that too instant and quick. Good idea.

I like this recipe..I like black eyed beans a lot and make this dish at home frequently by using Maharashtrian Goda Masala ...

Raaga, you won't believe it. This weekend we were in Chicago and we were at a Udupi restaurant for dinner. There was a North Indian couple talking loudly sitting at the next table and they were discussing same thing about dosa. The girl was saying how her mother was totally shocked when she ate dosa for breakfast :).
I love sundals too....Such a easy and comforting food.

Navarathri wishes to "The Singing Chef". Thanks for the quick sundal recipe.

fine read raaga. its difficult to digest for many people that krish eats dosa for breakfast every single working day. its much easier than stuffing and rolling parathas i guess:)
sundal looks lovely. i too dont soak black eyed beans, just pressure cook them as i did in my previous recipe of methi-lobia. checked ur recipe of lauki-channa dal masala also and i am gonna get few packets of ashirwad multi-purpse paste when we visit india nect time :)

I would be looped in the same category questioning "how can you eat dosas for breakfast?" but then thats because of time constraints...and it would be the same for alu parathas too...i guess i m too lazy to cook anything in the morning...we usually make chavli dal/curry marathi style...your sundal loks delicious...might give it a try sometime.

i eat dosa for bf yaar! there r a lot of ppl like us!

Rather belated navarathri wishes! But better late than never, I would like to think. :D
You have been cooking up a lot of nice prasadham.

I know what you mean. Growing up and living in a multi-cultural environment gives you a totally different perspective.