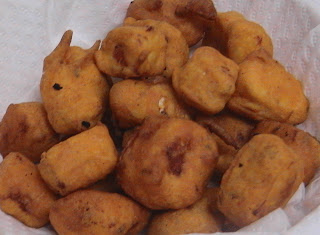 Too much health food worrying all of you at The Singing Chef? I now bring you a plate of home made paneer pakodas. These are technically bajjis, but paneer is not native to bajjis' hometown, so using musical's reasoning below, I will call these paneer pakodas. (Not pakoras, mind you!)

Oh Raaga, and about pakodas vs. bhajiyas or bajjis, that was really cute, i know that situation :).In Punjabi atleast pakodas is a generic name for both of them, and certain combos have to be pakodas, like say onion or spinach, really crispy! Stuff like cauliflower can be used to make both and veggies like eggplants, potatoes, mirchis etc only for the softer bhajjis. One just specifies karare (this term means kara+crispy) or polle (soft). In several Punju dialects bhajiya or bhujiya would refer to stir fries! Like aloo bhujiya, meaning aloo chopped fine and stir fried with jeera and coriander leaves.

Paneer is the vegetarian's meat. Or so I'd like to believe. Any dish that earned fame as a non vegetarian dish immediately gets reincarnated as a paneer dish. And so was born Paneer Butter Masala. I used to live in Gurgaon in the late 90s. My uncle and aunt were visiting me from Bangalore and I had made a nice meal including some puliyodarai and bisi bele bhat. My landlady had told me that she loved tamarind rice and had devoured it each time she visited her sister in law in Bangalore. So, after my uncle and aunt left, I took some over to her place. I laugh even today at the conversation that followed:

Aunty: Aapke mausa mausi aaye the? (Had your uncle and aunt visited?)

Aunty: Yehi sab khilaya unko? (You fed them these things?)

Me: Haan ji. Mixie ke bagair zyada nahin bana pati. (Yes. Without a mixie, I find it tough to make much.)

Aunty: To paneer hi khila dete kam se kam. (So you should have at least fed them paneer.)

And I thought, "Had I offered paneer with my BBB, that would have been more insulting to my aunt."

In any case, I was sick of paneer back then. I couldn't look it in the eye. But so many years later, I have changed. I can eat it, I can enjoy it and I can even rely on it coming to my rescue when all else has failed.

5 months after we moved in to this apartment, I finally found a milk supplier. And since I wasn't used to having milk delivered everyday, I'd gotten out of the habit of boiling it and storing it. One weekend, I found I had a surplus of 2.5 litres of milk. I quickly turned it into paneer by following Arundathi's instructions. I added about 2.5 tablespoons of lime juice to the milk just as it started to boil. 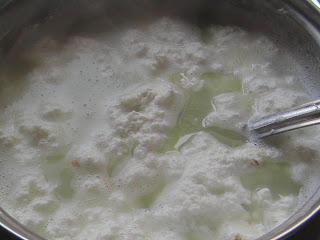 I hung this in a piece of cheesecloth and was left with these solids which turned into the lovely paneer below when I placed a heavy vessel over it. 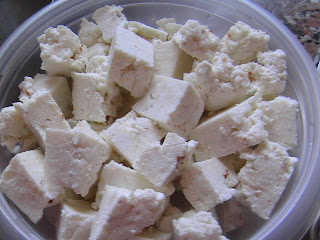 I have made paneer before and have always been left with crumbs that I can only make bhurji with. I used toned (3%) milk and got this result. I am very happy. Thanks Arundathi. 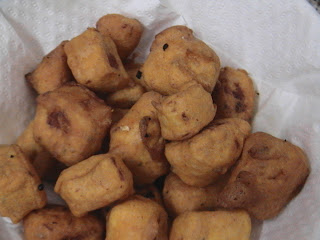 I turned these into pakodas that we devoured the same night.

Mix all the ingredients except the oil for frying and the paneer cubes together in a bowl. Add enough water to make a thick batter.

Heat oil in a kadhai or frying pan. Dip the paneer cubes in the batter and deep fry in the hot oil. Remove when the cubes are golden brown. Drain on a paper towel.

Put all the pakodas in a big bowl, keep your bottle of ketchup handy and get comfy in front of the TV. Eat like there is no tomorrow. Err, is there?

Your conversation is so funny :) Even with us if we have invited people over and do not feed them non-veg it is sacrilege !!!

incidentally, one of the visitors to our blog tried kodubale in convection oven instead of deep frying and apparently it came out quite well!!!! so there is hope for such indulgence :D

raaga- that conversation was soo funny..yet true. i have had my best friend's mom (they are Reddy)lament that she never gets to make anything special for me as i do not eat non-veg :)

@Sandeepa: I have heard that. Even in my mom's community (though vegetarian by tradition) as most people have turned non veg, it is near sacrilege :-)

@Lakshmi: I used to eat baked nippat in Malleswaram... so if my pakodas can be baked, kodubale should get the same status :-) Will try :-)

So many of the non-vegetarians believe that a meal is not fabulous or worthy of entertaining if it's 'just' vegetarian. I don't understand the reasoning behind it. What a funny conversation though. I love paneer and your pakodas look great. I had a frozen entree once where some green chutney was sandwiched bet. 2 thin slabs of paneer and then fried like pakodas and I've been meaning to try that sometime. Yours just reminded me that it's still pending.. :)

ooh! paneer pakoda, my fav, looks so inviting ;)
it sure reigns supreme....LOL

@Laavanya: yeah, I keep telling them that they have limited options :-)

@Richa: Come on over

Well pakodas look delicious. I can just imagine eating few of them, well to tell u the truth if i was there i would eat more than a few :-)

Can't wait to try these Raaga. Thanks for the recipe.

Padosike saath aapka baat cheit bhut badiya tha!
I never knew paneer was so special! We will be scoffed at if we prepare paneer for older people!
Leaving the padosi, coming to your bajjis, I keep wondering when you find time to make all this!:))

Paneer with BBB!!! LOL
kam se kam panner to khila deti!! hahaha!!
Good one!
if and when I visit u, i'd like BBB with paneer pakodas, no probs! looks SUPER!!

Paneer with BBB, people might not even touch it...atleast i wouldnt...hee hee

Lol, listen to that aunty Raaga... How could you not feed them non-veg, even if they don't eat it :D

The pakodas look great...I could make it for my vegetarian friends when they visit.

i see paneer pushers everywhere. they think it is a food group or something. paneer is one of the most overrated indian ingredients, methinks.

raaga...actually when i saw paneer pakodas in ur blog..my first reaction was YES!! no more guilt baby ;)..but i thought it would be crude to write that...now since the truth is revealed by you..i am being honest ;) U R such a sweetheart :)

Funny conversation that was! Nice pakodas. What could be better than dunking paneer in batter and deep frying? :)

Ha ha ha ...that was a funny conversation. Homemade paneer turned into pakodas...you are awesome. Love it just by the looks. Nice recipe.

He he, that was a funny conversation, Raaga :-D. Baked Nipattus in Malleswaram, hmm, i am pretty sure at some point our paths must have crossed in Bangalore ;).

Naam mein kya rakha hai, its tasty any which way :-D. Now hand over that platter ;).

That was really a funny conversation...enjoyed reading your post and paneer pakodas are my favourite.

Enjoyed the conversation...Paneer does seem to have a very high rank. Anytime, one has guests, at least one paneer dish is on the menu and only then it is considered a special meal. :)
Meanwhile, loved yur paneer pakodas. I had these once at a roadside dhaba on our way to Chandigarh, i think. They were yummy. I think i should try them soon at home :)

Who? Us? Complain about too much health food? Never! (lol)

That is a hilarious conversation, and I can imagine the horrified look on the landlady's face. But what to do, we are like that only - unity in diversity and all that.
Those pakodas made with homemade paneer must've been so creamy and delicious.

wow thats so awesome! u made paneer from scratch!

My sister makes paneer from scratch the same way (I prefer tofu, which is almost the same, but from soy mik - I cannt drink milk).. and right after it curdles, she adds vanilla or cinnamon sugar to the cubes. (she loves sweet). Then she chopps up banana, pour some chocolate over and eat it as desert ;-)

yummy he i want some now :::::)..
you really made me think is paneer is imp in the north as a kid i never had paneer at home!

Raaga, your last post was about soups and healthy eating and now you are eating pakodas???, has the starting of winter finally caught up in Gurgaon?LOL
anyways,mouth watering pakodas and a delightful conversation!

Ur pakodas remind me of the lovely paneer pakodas (with spinach filling) that I used to have in Chandigarh..

nice entry, raaga..cud have gone for the whole plate if it was for some fat-free paneer!!....lol