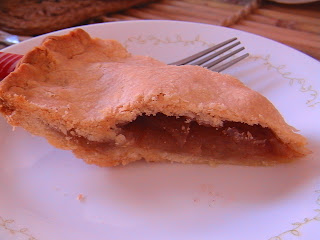 As easy as apple pie! Has anyone ever said that to you?

I always thought that baking a pie would be a really difficult thing. And when I saw the UTV ad with the tagline "as easy as apple pie", I'd look at Amma and say, "He's kidding, isn't he?" And she'd say, "No, it is supposed to be a very easy dessert." By that time, I had been baking for about 6-7 years and had even baked a black forest cake from scratch for my brother's 21st birthday, but I'd never tried my hand at shortcrust pastry.

Off I went to Ann Pillsbury's book for some more lessons on baking. This pastry dough is easy to master and I was so thrilled that I could bake lovely pies. Many years later, when I was with GE, there was a bake a cake or dessert contest. I didn't have a fridge, an oven or even a pie tin so I'd decided not to participate. I was spending the weekend with a colleague who was planning on baking gingerbread for the event. I went with her to the INA market and suddenly got very excited. Seeing my enthusiasm, she suggested that I buy the stuff and bake my pie in her house. She didn't have a pie tin, but she said I could use any cake tin of hers. I didn't even have a recipe, but there are times when I can really rely on my memory. And that moment was one of those. I did bake my pie and guess what? I won the first prize. Ever since then, I've been baking this at regular intervals.

Last week, a close friend was visiting from Bangalore. She has recently completed her PhD and started working. When we'd gone to see the Qutb Minar, I asked her if there was anything specific that she'd like me to make for her while she's here. She thought for a bit and asked, "Can you bake me an apple pie?" And I actually said, "Wow, you picked the easiest. Sure."

So, I baked this on Sunday morning. We ate a little, I packed some for her to take back and we've been savouring the pie, slice by slice.

Place the flour, salt and butter in a bowl and mix together till the mixture resembles small peas. Gradually add the water and knead gently till it forms a dough. (Do not knead as you would for chapati/poori dough.) Divide the dough in two portions.

Roll out on portion and carefully place it in a pie tin.

Mix the sugar and cinnamon powder. 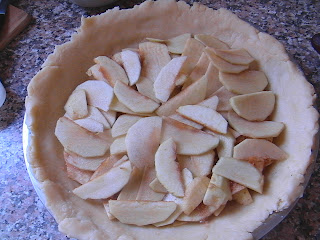 Arrange the apple slices over the dough. 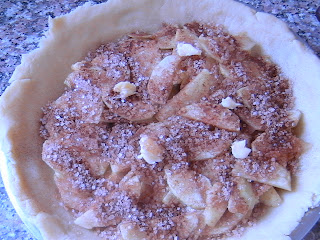 Sprinkle some sugar of the sugar and cinnamon mixture. Repeat this until you run out of both. Pour the lime juice over this. Top with the butter. 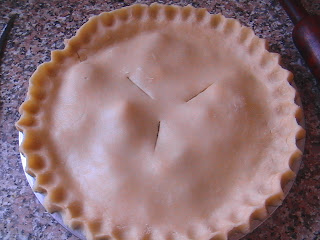 Roll the second portion of the dough and cover the pie. Pinch the edges together to form a pattern using the thumb and index finger of one hand to pinch some dough and the index finger of your other hand to seal the two layers. Make 3 or 4 slits in the top crust. 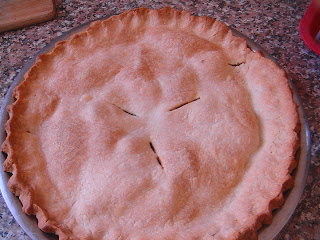 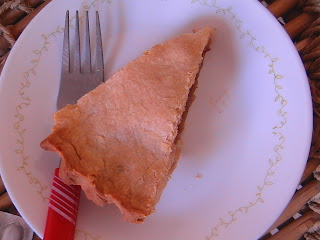 Allow to cool a little (just a little) and cut into slices. Enjoy it while it is warm. 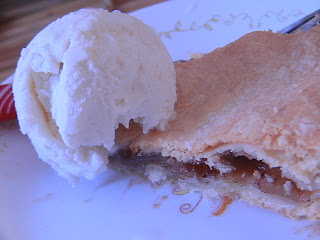 With apples in season here, I am going to make this more often. I am not sure how substituting oil for butter will work on this dough, but its worth a shot. Apples and cinnamon go so well together that I am certain the experiment won't fail anyway.
Posted by Raaga on 10/05/2007

Raaga,
Nice step by step explainations...Easy to understand and seeing the picture itself ,people like me will not be afraid of baking an apple pie..Yet to start Baking...Think this will work for the first time...its simple...And I agree with you that cinnamon and apple combination is a very good one..:))If i try this and comes out well,I will post the photo and let you know..!

This is one of my husbands fav desserts! looks quite simple to make the way you have described it.thanks for that, will try it!

wow raaga...it looks great..you have made pastry dough from scratch..that is really good...i am yet to venture to that, getting spoilt with the frozen sheets here!!

Apple Puree is a good substitute for butter 1:1 as I recently discovered. I think this will work very well for this dish.

@Madhuli: Everybody's fave I think... my dad loves pumpkin pie and that will be my next :-)

@Rajitha: readymade foods do make us lazier than we are already :-)

@Lakshmi: I know I can replace it for cakes, but not sure about shortcrust pastry... will try :-)

Warming fall food, adding raisins would be lovely too??what do you say?Delicious!

Now that does look good Raaga. I have not made an apple pie for ages!!

Wow raaga they just look delicious.
I have never made a pie always thinking it is too hard and only ppl who are used to it can make them.
I would love to have a slice from yours.

Your narration of that incident was so cute :) So this is one of those prize winning recipe, eh ? :) Thanks dear :)

I'm not a baking expert. Your step by step pics are of great help for budding bakers like me. So, You won the 1st prize? That's really great.Glad that your friend suggested you to do this.

you have a great memory. :D

@Bindiya: I've had versions with raisins and bread crumbs as well, but this is the only way I make my pie :-) don't know why :-)

You sure made it look easy but I don't think it will be such smooth sailing for me:)

i make cherry instead of apple...ingredients are almost same.....love ur pie.

Wow!! Raaga, Incidently I've posted on Apple pies today. I've enjoyed the step by step procedure in your post. Will surely bake it sometime. Thanks for the recipe.

waw you baked a beautiful pie from scratch!! looks so professional and perfect!

Wonderful! It makes my mouth water. I think I will have to go and look for my mother's special recipe. This year it is twenty years since she passed away, and I think that doing little things like this helps to keep her memory alive.

Anyway, I've just stumbled across this blog, and I love it. I've just blogrolled you - expect to see me as a frequent visitor :-)

As for the oil vs. butter in the shortcrust: not a good idea. In most other recipes it would be fine, including most batters and cakes.

Shortcrust however relies on the cold fat (e.g. butter, marge, vanaspati) for its chemistry. The fat should be hard, and when it gets into the heat of the oven it melts, causing the little flaky layers that are so yummy.

That is why you use ice water, and the tips of your fingers to mix the dough instead of the palms of your hands (that are much warmer), and why you never overwork the dough like for poori or bread.

Most shortcrust recipes will also tell you to wrap the dough and place it in the refrigerator for some time before rolling it out. This allows the fat (butter) to harden up again - and coincidentally the flour to relax, making it more pliable.

You made crust at home..:O.. You are brave. I always hesitate looking at the fat :(

I was looking out for this recipe. thanks for sharing. It sure looks delicious.

dear singing chef (i like the blog name) ..while browsing the blog sites, i came by your site and loved it..the way you have organised it. Am new to blogging and a beginner in sugarcraft, so do pass by my site and critique me.Currently am living in Botswana
http://sugarcraft-india.blogspot.com