We love eating out. And one of our favourite restaurants is Earth, an Italian lounge. Their tag line is "Heaven is a place on Earth" and we definitely agree. Now we end up going there so often that their entire staff recognizes us. We're friends with the manager and the head-chef. And we're probably the only ones who go on stage and sing along with the artist who gives live performances. It's one of those restaurants where we feel totally at home.

But having friends has its advantages. We were recommended another restaurant by the manager there as he felt that we also needed some change. He made reservations for us and we landed up there. Our experience there wasn't great and we left after having a drink each and an appetizer. The serving size was so terribly small and the drinks so expensive that we decided to leave early. Moreover, for an oriental lounge, the DJ was playing hindi music. Something we thought totally out of place.

But the appetizer we had was really nice. The waiter claimed it was a Thai dish. I didn't think so. Then he said they had Indianized the dish (as they had the music) to suit clients' tastes. 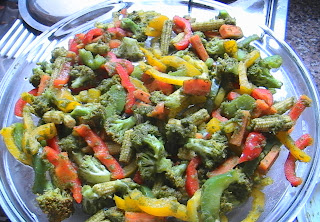 I decided to try it at home. I had all vegetables that we had that night except for mushrooms. To convert it into lunch, I added a handful of boiled pasta.

Salt and Pepper to taste 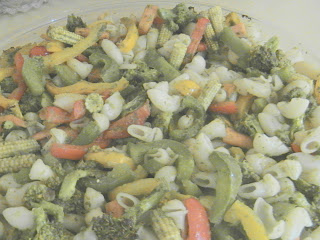 Toss the vegetables in the marinade and grill for 15 minutes. Add the boiled pasta and toss well. Add salt and pepper.

Apart from tasting really nice, this salad is a treat for the eyes as well. My photograph doesn't do it much justice (the world knows I have lighting probl;ms at home!). But it is a very colourful salad. I'm going to make this more often when the lovely vegetables are in season.

looks very good and healthy too!

The salad looks yummy and healthy raaga.. this wud be a nice entry for WYF - Diet food.. what say?....:)

You are with lots of good ideas these days. The dish looks really nice and healthy

Nice idea for a pasta salad for a sunny day! Your platter looks so colorful....

Hi nice recipe :)Would like to know where this Earth restaurant is:)

Colourful and healthy too..

hehe that is so funny that you visited a restaurant so many times that even the manager thought you needed a change! :D That earth sounds like a great place... the salad looks yummy, but as you said there is not much thai in it :)

looks wonderful.....and a wholesome and healthy meal ....must try

This is definitely a guilt-free meal.

real healthy salad, Raaga...was reading ur post on the apple pin..me too am in a position as u were couple of years ago..trust what, i have not tried my hand in baking not even a single piece of scratch..but , inshallah, i hope i try that soon...really want to..just waiting for that go signal from within..

Looks so colorful and healthy. Bounty of veggies....love it. Nice recipe and pic.

so where's the thai? lol

that should make for a healthy yummy meal - great idea to toss in some pasta.

Thanks all of you... I've been facing huge net issues and haven't been able to comment on my own blog!!

Anon: Earth is a restaurant in Sec 15, Gurgaon. Right next to the Fabindia and Amway outlets.