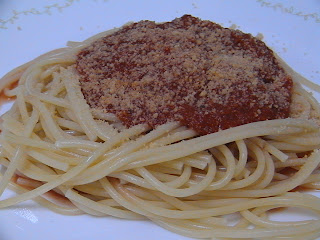 A meal that is about as simple as can be: Spaghetti. I sometimes tend to think of Spaghetti as being more American than Italian. Quite the same way as I think of Pizza.

While I was introduced to Macaroni in the comfort of my own home, Spaghetti was a whole new experience. The first time I saw it was on the supermarket shelves in upstate NY. But I didn't pay much attention to it. Think about it: an 8 year old from India in the US for a very first time, despite the fact that her parents spent a lot of time there, in fact met there and decided to get married, walking through the aisles of the supermarket, taking in everything from Mars to Juicy Fruit to more cheese and vegetable varieties than she even knew existed. Spaghetti would hardly have been the thing to draw her attention.

But when Amma brought home a can of Spaghetti and cooked it on a day when only H and I were having lunch (my parents skip one weekday meal as a way of giving thanks - they belong to very opposite cultures and married at a time when marrying on your own was taboo enough, let alone marrying someone outside your homestate, culture and clan.) I think I was hooked since then. 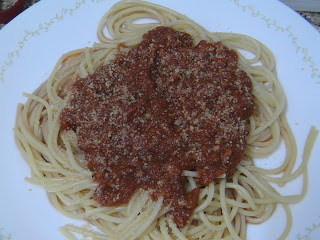 Here is the simplest way to make Spaghetti at home. (Apart from buying readymade sauces!!)

Heat the 2 tsp Oil. Add the onion and garlic pastes and fry for a couple of minutes. Add the chilli flakes, parsley, basil and oregano and fry for a minute. Add the tomato puree and allow the mixture to boil.

Boil 2 litres of water with a little salt and 1 tsp oil. Add the spaghetti to the boiling water and cook for 10 minutes. Drain.
Add the cheese slices to the sauce and stir briskly till it blends well. Add salt and pepper to taste. 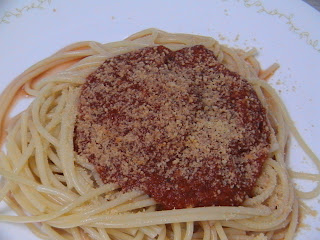 Serve some spaghetti on a plate. Pour the sauce over it. Sprinkle with cheese powder and enjoy.

We were watching "The Pursuit of Happyness" and I actually made this in fifteen minutes between parts one and two. I like the fact that with stuff like tomato puree so readily available, even an "exotic" dish takes little effort.

I am sending this to Paige from Chef Girl will be hosting the Weekend Cookbook Challenge for August. Paige has chosen a super theme - Dinner and a DVD.
Posted by Raaga on 8/12/2007

A very quick dish Raaga.
Nice to know about your parents.

@ Viji: Thanks :-) This is a childhood favourite.

@SeeC: In a few weeks' time they'll celebrate 44 years of being married and almost 48 years of having known each other!

@Archana: Thanks... this is really about as simple as cooking can get.

@Sharmi: Thanks. For something that got ready in a jiffy, this really does look and taste lovely.

Thanks Sig. I will put it their story down sometime for sure.

Mmm, that does look delicious. Thank you Raaga for joining us at WCC this month!

@Sara: It was my pleasure entirely :-) Thanks

Similar One A...Even the presentation :D