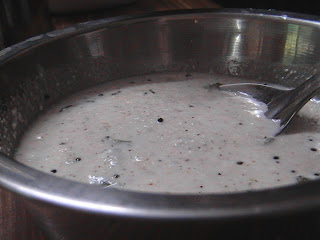 When Swapna announced the RCI: Oriya Cuisine event, I thought to myself, "Even though I've had Oriya friends and colleagues, I have never learnt much about the cuisine of the state. I read Bijoylaxmi Hota's interview in The Hindu when she released her book Healthy Oriya Cuisine along with her daughter, Kabita Pattanaik.

Soon after reading the article which talks about acidic and alkaline foods, I met a lady who had spent all her life in Orissa, though she was originally from Bengal. I asked her about Oriya cuisine and I was rather shocked when she said, "There's nothing great about Oriya Food." I left it at that. If I didn't like something I'd say that I didn't like it. I think each cuisine has its own flavours, tastes and hues.

Anyway, my research told me that the cuisine has so much in common with other state cuisines. I found recipes of things like were similar to the aloo bonda (batata vada) and one sweet dish that was the adirasam of Tamilnadu. I found this recipe on Oriya Kitchen which has an uncanny resemblance to the Tayir Pachadi of Tamilnadu.

Beat the curd properly. Add the sugar, salt and coconut to the curdand keep aside in a bowl. Cut green chillies and ginger into small pieces.

Heat oil in a frying pan. Add punch phutan and allow it to splutter. Add curry leaves, ginger and green chillies and fry them little bit. Add the seasoning to the curd mixture.

This is being rushed to Swapna as today is the last date for the RCI: Orissa event. Happy hosting Swapna.

Excellent Pachadi!! Raaga sis, I am glad you sent a Oriya dish at last!:))
You know that Oriya book I posted,it has mostly south Indian food along with some Oriya food.Strange!:)

You made it :) sounds tasty Raaga dear...

For all its diversity Indian cuisine is quite similar at its core isnt it?

Dahi Nadia...does that mean "rivers of yogurt"??
It looks delicious, I would relish it with some pulao on the side.

that sounds so simple and easy. clever entry!!

Lovely recipe and perfect accompaniment to a rice dish :). I liked the Oriya Kitchen resource too!

Right.. Except for punch phutan this is thayir pachidi. Most of the Indian cuisines have something in common.

This is a nice and simple dish. Good entry :)

@Latha: I was focussing so much on a dish called Ghugni... and when I finally got down to making it, it seemed almost identical to the Ragda that I posted before... so last minute switch :-) Thanks :-)

@Asha: Your first Karnataka dish has been posted. I am so glad I sent in an Oriya entry... waiting for the round up.

But as I said, there are so many parallel recipes... just different names :-)

@Sig: Yaaaaaaaaaay. I made it. I told Swapna I'll be the last one in and I probably was :-)

@Ashwini: Yeah... sometimes I get confused about dishes and don't know whether they're from Amma's side or Annu's... stuff can be so similar!

@Nupur: There you go. Musical answered that question for you. It would go very well with a pulao for sure. Thanks

@MusicaL: Welcome. The internet is such a lovely resource. I had no idea about anything Oriya until this event :-) Thanks

@Sreelu: Was new to me too... the addition of punch photon and sugar :-) Thanks

That's a nice dish... almost like our pachadi, minus the sugar & panch phutan.

Raaga,
thanks for visiting Simple and delicious!
Food from your state is new for me, would love to try them..