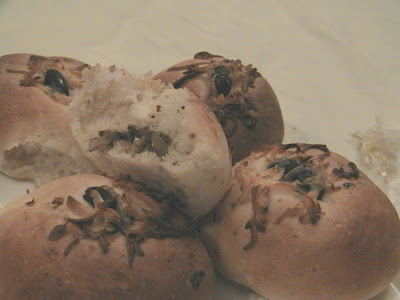 After that series of regular Indian fare, I tried some more baking. There was some more chitchatting with Mr. Yeast. I told him how glad I was to have him back in my life and he told me he was glad too. He did think that 21 years was an awfully long time to be abandoned and unloved, but he promised not hold that against me. Having settled all that, we got down to work.

I wanted to try an all flour bun. I just wanted to see how it would turn out if I were to try to recreate the bakery stuff at home. But I couldn't get nice pictures as I baked them at night. I have white light in the kitchen and the bathrooms, nowhere else. And the lighting in the other rooms is through shades, so it doesn't help any. I can't use the flash as it would just spoil the picture. 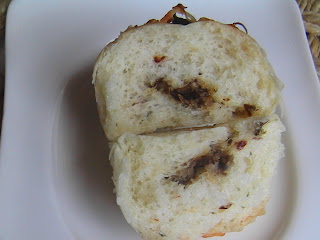 And I saved one to take a picture, especially for Anita, who wanted to see what the bun looked like when cut. But it looks like I saved the worst one of the lot for the picture. But the little rolls were out of this world. I didn't think that I could make something so soft. The rest we almost polished off last evening and S took a couple to work. (His colleague called me and asked me to quit my HR work and start a bakery or catering unit.) 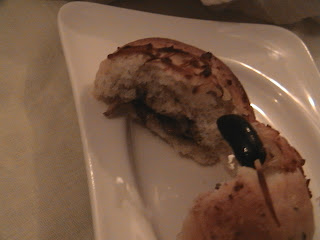 I experimented a great deal. Not with the flour this time. But with the dough. The result was great. The feeling was, "Why did I not try before?" 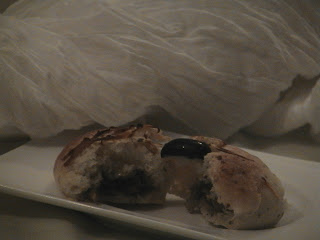 For the topping (optional):

Take a huge mixing bowl and place the oil, salt and sugar in it. Add boiling water and mix until the sugar dissolves. Add the milk now to bring the mixture to room temperature. Add the yeast and mix well. Add the flour, cheese, parsley and chilli flakes and knead into a dough. Place the dough in a greased vessel and cover it with a damp muslin cloth. Allow to rise until double in size (roughly 45-50 minutes).

Knead the dough for a minute and then divide into 16 equal portions.


Take a portion of the dough and spread it on to your palm. Place some stuffing in the centre and bring the edges together and seal. Place an olive quarter on each roll and sprinkle some cheese on top. Place on a greased baking sheet or tray. Repeat with the other portions. 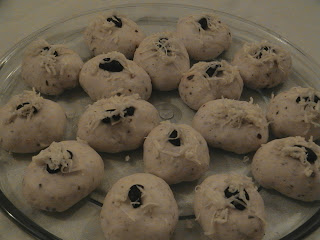 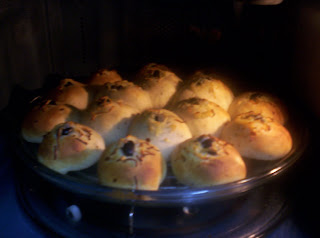 I was going to make some pasta so we could have these rolls with dinner. So much work in one day: Sacrilege!! And to add to it, S looked at the rolls and said, "We'll just eat these. Ditch everything else." The Miss Lazy hiding inside me couldn't argue, could she?

These rolls are off to Scott from Real Epicurean for the Weekend Herb Blogging, started by Kalyn.
Posted by Raaga on 8/10/2007

It was fun reading your intro.
Good job Raaga.

All you girls bake so well, I am kind of ashamed :(
The last pic looks lovely, golden and perfect buns

Mmmmmmm nice rolls, I love mushrooms with everything.
Rols go with anything, even some light soup would make a great meal

@Srivalli: I am enjoying this :-) Thanks

@Cinnamon: Just what I wanted to name the post. Thanks

@Sandeepa: I have only just begun. If you pictures of my failed fruit buyn experiment, you'll know :-)

I think you should really leave your HR job and start baking. :)

Asha: Even Sachin agrees with you wholeheartedly :-)

Hi Raaga another lovely recipe :) Mushrooms are yum I bet your rolls where great. :)

the buns look so great. I too have to make them. lovely savory buns. My hubby and son would love this one.

I love the look of your mushroom buns. I think my friend would love this, too.

Thanks Jeena, Sharmi and Anh. I hope you try it out and let me know :-)

Look great. I am planning to try them on Sunday for breakfast, so maybe I could invite you over this time.

they look so tempting, breakfast meal with these buns would be a good idea. May be prepare it the previous day for a next day breakfast. Lovely recipe and thanks for sharing