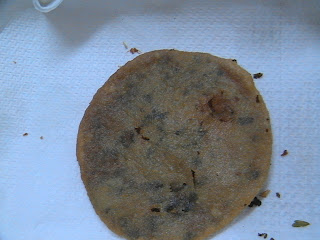 A misnomer all right! Here’s one of my favourites, but it is neither a biscuit, nor a roti. It is more like a stuffed poori. It is one of the best tea time snacks that I have had, though I sometimes make it for brunch. I recently made it as an appetizer when S invited a bunch of his office folks for dinner and everyone, including 3 year old Abhi (S’s colleague’s son) enjoyed it. And only when it was almost finished did I remember I wanted a picture of it for this blog.

Since it is deep fried, I don’t make it that often. But this is what I would classify as “memory food”. Unlike comfort food, this isn’t something I eat when I am down to feel better. This is something that I have one huge or several small, but deep-rooted, memories linked to. My oldest memories of Biscuit Rotis go back to about 20 years ago. I was all of 10, a girl guide and on my way to my first national jamboree in Shimoga, Karnataka. This was to be the first of many such camps that I attended until I received the highest accolade: The President’s Award. (More about this will be featured soon on my other blog.) I’d never been to a camp, that too for 7 days, except for one that I attended the previous year. But that was at KV CLRI, across the street from my own IIT campus. Amma packed a whole lot of these in foil and gave them to me. I ate about one a day and my classmate, Anandhi, shared my treasure. She, too, has fallen in love with this. After that, this became a feature in all camps and when I was in Garhpuri in 1991 for the Rashtrapati Puraskar camp and I got to the packet only on the last day. Surprisingly, they were good even then; despite containing coconut and coriander.

Mix the dry ingredients for the dough and the oil. Add water and keep kneading till the dough is like poori dough (a little hard). Make into small balls and keep aside.

Mix the coconut, coriander leaves, ginger and chilli pastes and the salt. Add the besan, a little by little until you are able to make small balls of the mixture that do not disintegrate.

Roll one ball of dough a little, place a portion of the stuffing mixture in the middle. Bring the outer edges together and seal the mixture in. Pinch off any excess dough. Roll this in some wheat flour, ensuring that it is not too thin at any point (ensuring that the stuffing does not peek out).

Deep fry in hot oil and drain on a tissue. These biscuit rotis do not need anything to go along with them and taste great as they are. Most friends of mine who’ve tasted this have fallen head over hells in love with this. Try it; I am sure you will too.
Posted by Raaga on 5/14/2007

Raaga,
this is sounds so interesting! But do you think this cannot be made like any other roti on the tava...i think it will turn out fine like a mini paratha! Love these traditional recipes

Hey Nandita, I forgot to mention. I did make these as parathas one morning and they turned simply divine. And we ate with them with less guilt :)

Yeah Nupur. Memory food :) the stuff that we make and when we sit down to eat, we get all nostalgic about :)

Why is it called Biscuit Roti??

how wonderful to know a name for this...so as you say there is no reason for the name!...still its one wonderful dish!

That is seriously mouthwatering.
Lavanya