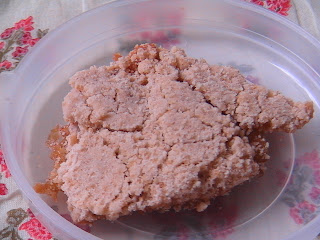 I won a contest many years ago for my Apple Pie (the credit for which goes to Ann Pillsbury). Initially, when I heard the phrase, "as easy as apple pie", I would think, "what's so easy about that?" and then when I made it, I realized that it was a very simple dish to make. But earlier this week, when I'd invited a friend over for dinner, I didn't have the time to bake a pie, I decided to make Apple Crumble. I tried to look for the recipe in several books (as I didn't have access to the net that day), but I found none. So I made this from memory and it turned out yummy. Don't let the picture deceive you.

In a separate bowl, mix the maida and the butter along with the remaining sugar mixture until it resembles bread crumbs or small peas. Press this mixture over the cooked apples and bake in the microwave on high for 8-10 minutes. Allow to stand for 10 minutes for the crust to harden. Cut into pieces and serve with vanilla ice cream.
This is my entry to Weekend Herb Blogging, started by Kalyn and hosted by Kalyn herself.
Posted by Raaga on 5/26/2007

You know what, I tried to make this dish last to last week, where the stupid recipe asked me to add about 1/2 a cup of water to the apples, n as you would know it turned out a disaster, & a disappointment for my husband who eagerly awaited the dish to come out of the m'wave!! Though the crust looked all beautiful & brown the lower portion was watery!! I had to throw it all away.

I am going to try yours.

but why throw? it would still taste good