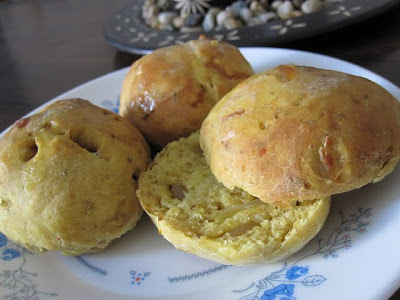 I love baking. I just don't bake often enough. I have been putting off baking with yeast and had promised myself that I would start when spring came. It is already hot and I realized that the "blink and you miss it" nice weather in these parts is not going to last very long. If I didn't act soon, it would be too hot to think of cooking and baking. I did have inspiration from the weather. If that wasn't enough, Rachel announced her edition of Bread Baking Day, the theme of which was buns.
I'd also bought a few cookbooks recently and one of them was a book about breads. Most recipes in this book asked for fast action yeast. So, I wrote to my friend, D, and asked her to get me a few packets and her husband brought them for me. Now, I had everything in my (and the buns') favour, and only needed to shake off the shroud of laziness.  I was glad I did because, as I type, we've already polished off about 5-6 of the 10 buns I'd made. I shaped the rest of the batter into my loaf tin and baked it. I think the recipe would yield 16-18 small buns. I modified the recipe and used some of the Southwestern Spice Blend as well.


Mash the potato and mix it with the butter. Keep aside.

In a pan, heat the oil and fry the onions for 4-5 minutes. Add the cumin, fennel, paprika and turmeric and fry for another minute or two.

In a mixing bowl, place the flour and add the yeast, spice blend, salt and sugar and mix well. Add the mashed potato mixture and the onion mixture. Add the water, a little at a time, and knead until the dough comes together and forms a ball. Cover and allow to rise for 10-15 minutes.

Divide the dough into 16 balls and form each ball into a bun. Place the buns on a greased plate and allow to rise for an hour.

Preheat an oven to 200C/400F and bake the buns for 20-25 minutes. When done, split the buns in half and spread some butter. This stuff is better than anything you could buy at your local bakery. After all, you'd have made these yourself.
Posted by Raaga on 3/20/2010

Thanks... they are really yummy!

Buns look so soft and full of flavors

If I made this, none would survive too long :)

wow, these look so good and tasty..

Deelicious, will try this this weekend!

Potato bread and buns are very popular here in the stores, but I think I would rather have the ones you have baked Raaga.

Loved ur spicy buns. With such wonderful ingredients, I am sure this bun is a hit!!!!!!!

Is that the Sara Lewis book? I just made some spiced potato bread from that....the buns look really soft

I know they are perfect and 100% better than store bght ones.I tried your coriander buns and they out EXCELLENT and PERFECT.HEARTY THANKS for the KEEPER recipe.
I will be posting it within a day or two and will be sending it to T&T as well as BBD.
Mr yeast and myself were separated but your coriander buns have brought us back hopefully for good.THANKS

Raaga -
Long time since I peeped in with a comment. Happy Yugadi to you and your family (Belated!). I will surely try this bun recipe. This recipe reminds me of MTR spicy buns :)

I LOVE any kind of potato bread,..from rustic hard crust to soft and squishy. The addition of onion makes them even more special. Beautifully done and a recipe I must try!

I'm glad you had the insipration and you should bake more often. ;-) Thank you for your participation in BBD.

I am an ardent follower of your blog.
Where can I find fast rise yeast in India?Is there a particular brand that I can use?

I got my rapid rise from a friend in the US and then a cousin brought me some more. I have not looked for it in India.