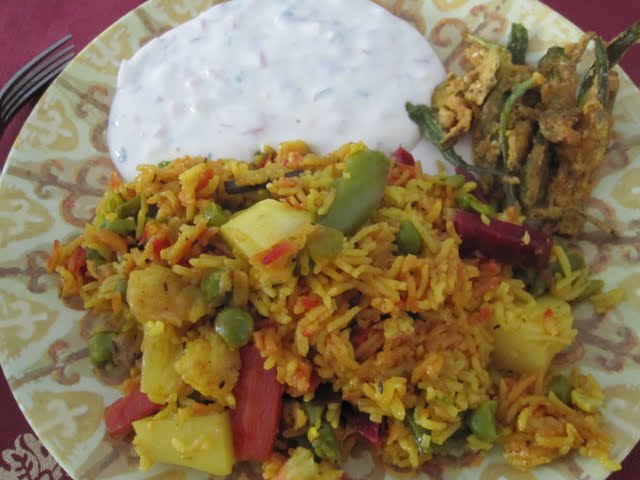 Pulaos are my go-to dish. It doesn’t matter what day of the week it is or what time of the day it is. I love the fact that a one dish meal (the fill it, shut it, forget it kind) can be so tasty, so colourful and so nutritious. If all I’m serving along with this meal is a raita, I make sure I add soya chunks to for the protein element. I usually add all vegetables that I can find and there are times when the outcome is a complete hash. There are of course others when the resultant dish is a beautiful medley of colours. This pulao is one such.
I tend to use any spice that catches my fancy and do not have a fixed rule about which spices to add in which dish. As a result of this, it is rare that a pulao I make on one day will taste like the pulao made on another day. But when it turns out great, I always make a note of what went in. This time around, I used a tablespoonful of Tortilla soup seasoning (Southwest Spice Blend) that my friend, D, sent me from the US. When she sent it, I had no idea what tortilla soup was or how the seasoning is to be used. (It is a different thing that such knowledge is as far from you as you are from the nearest internet PC.) The spice mix has cumin and paprika among other things, so it works very well in Indian dishes.
1 cup Basmati Rice, washed and drained
1 Onion, sliced
2 Carrots, peeled and cut into 2” pieces
1 Capsicum, sliced lengthwise and cut into 2” pieces
2 Potatoes, peeled and cut into 2” pieces
15-20 Beans, strung and cut into 2” pieces
1 Beetroot, peeled and cut into 2” pieces
A small head of Cauliflower, broken into florets
½ cup Peas, shelled
½ cup Soya Chunks, prepared according to instructions on the pack
2 tbsp Oil
1 tsp Cumin Seeds
3 1” sticks of Cinnamon
3-4 Cloves
1 tbsp Tortilla Soup Seasoning (Southwest Spice Blend)
½ tsp Turmeric Powder
½ tsp Chilli Powder
Salt to taste
Heat the oil in a pressure pan and add the cumin seeds. When they crackle, add the cinnamon and cloves along with the sliced onion. Fry this mixture for 2-3 minutes. Add the other vegetables, salt, turmeric and chilli powders along with the tortilla soup seasoning (southwest spice blend). Add the soya chunks and fry the entire mixture for another 5 minutes. Add the rice and 2 cups water and mix well. Cover the pressure pan and cook for 2 whistles. When the pressure is released, open the pan and fluff the rice with a fork. Serve with a raita or plan curd.
We had this with some onion raita and lady’s finger chips from Ananda Bhavan.
I’m also very happy to be a part of the Great Vega’n Vegetarian Project that Cynthia has started. My first post came up yesterday and I hope to be a regular contributor on the blog. Tried & Tasted event event is also currently on and The Singing Chef is the chosen blog for March 2010.
Posted by Raaga on 3/19/2010

Indeed it looks colourfull. And i agree that you use the spices you want that is the beauty of making pulao isn't it. Love the tortilla seasoning you have added.

I agree- tortilla seasoning is flavorful and works well in all kinds of Indian and Indian fusion dishes too.

So have you actually made Tortilla soup yet? I have a recipe that I got from an old roommate and it is definitely one of our favorite soups.

The pulao is as colourful as its name suggests. Looks beautiful

The Rice looks good.I guess you have put a Mexican spin on the pulao. It never hurts to try new seasonings.