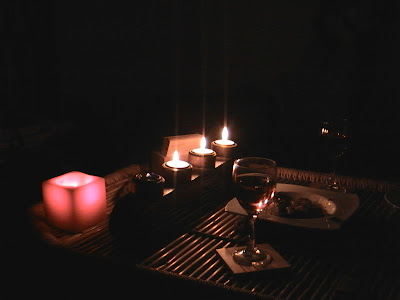 A houseful of guests. And then an empty nest. We weren't exactly "relieved" to come home to an empty house. We weren't exactly feeling terrible about it. Mixed feelings would best describe what we felt on the evening of the 31st of December. Almost two months of having guests at home made us "get used to" the idea of having more than just us in the house. And at times I felt as though everyone should have just stayed on till New Year's and celebrated the end of the two month long party that started around Diwali.

We had no plans for New Year's Eve. We were not sure about what to do and where to go. I was at work the entire day and just wanted to get back home as soon as possible. The roads felt like all of Delhi was heading to Gurgaon to party. And I didn't want to be stuck somewhere on the road from Delhi to Gurgaon. Thankfully, we reached in about the same time that we normally take. I wished my colleague a happy new year and rushed home in the biting cold.

S had requested Italian food. I thought about a lot of things. And then decided to make it special. I had seen a recipe for lasagne on the net and I can't remember exactly where. So, the "Italian" bit fit really well into the evening's plans. I also wanted to make some sort of finger food. We had some bottles of fruit wine stashed away and cheese is usually what we love with our wine. But I thought there'd be too much cheese, what with the lasagne and all that. So, I made some gnocchi instead. 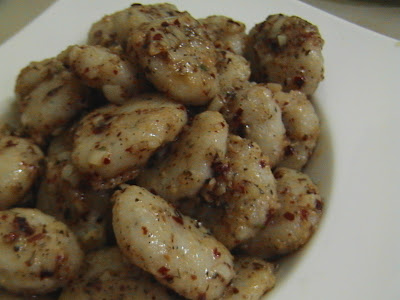 For the Garlic Butter Sauce:

Salt and Pepper to taste 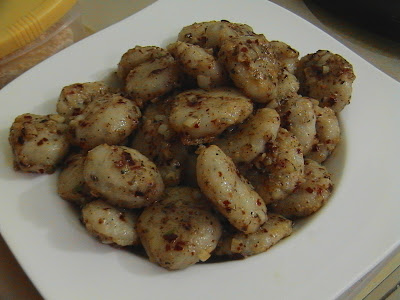 Knead the potato, flour and salt lightly into a dough. Make small balls of this dough and flatten them using a fork. Boil plenty of water and add the salt and olive oil. Drop these flattened rounds into the water and remove them when they come to the surface. Drain completely and keep aside.

Heat the butter and olive oil in a pan. Add the garlic, chilli flakes and herbs. Add the cooked gnocchi and the salt and pepper. Toss around a little and take off the flame. 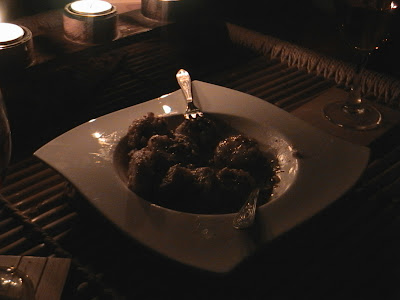 I really didn't think I'd pull off something quite as fancy as a cozy candlelight dinner for two. I actually set the table, got the candles out, lit them. Poured the wine into the glasses and had everything ready before S returned from the boys' party at his boss' place.
It was an evening to remember. OK, the lasagne got burnt a little, but so what? In my opinion, it beat any party that we were invited to and didn't attend. No hotel, restaurant or pub could have given us a better deal.
I'm sending this to Sunita for her monthly event Think Spice - Think Garlic.
Posted by Raaga on 1/08/2008

ohhh looks so cosy and romantic :) i am bookmarking this :D

Quite a party indeed. But, Raaga, they(Italian chefs) say that the potato dough needs to be barely kneaded to attain the 'little pillows '(gnocchi) effect.

YUMMO!! I just bought Gnocchi board to make Potato ones. Love it.
Did you see my Spinach Gnocchis at Aroma?

cool recipe!! will give it a try...happy new yr, dear.yeah looks romantic..

oooooh... so romantic... Love the candle light setting darling... what a great way to start the new year... And the gnocchis look delicious, I have never made these at home...

How perfectly nice& romantic!!! the candlelight setting !Aaah!!!
Gnocchi looks super, I have been putting it off for a long time ( thinking it was far too complicated to tackle right now!! dhuh!!)
I must venture into this cuisine!!!

Raaga, your candlelight dinner is of course the best deal ever...how very romantic :-)...lucky S...and thanks for remembering to send the gnocchi over to me as well:-)

Your gnocchi looks soft and tender. Each one must have been a delight in the mouth.

next time i drop in i'll insist on a candle light dinner ;)

Lovely post, in every single way! True, nothing else can equal these moments :).

Wow, that sounds like quite the romantic evening... nice~~ :D

I've made gnocchi only once, and another time tried ravioli with spinach(liked it loads).. but been ages since i tried these.. ur post gives me motivation....

@Happy: It was a wonderful evening

@Ashakka: What is a gnocchi board? I'd love to own one some day!!