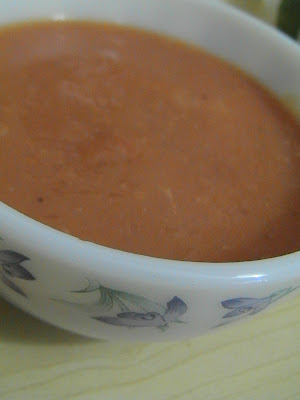 Year after year, my summer vacation was a 50 day affair. Starting on the first Sunday in May and ending on the last Sunday in June. The routine never changed. Except for the summer of '92. I had just taken my Class 10 exams and was free from the 14th of March. And school was not to resume until July. Three and a half months. It was the summer of several firsts. I attended shorthand classes that summer. I learnt tailoring from my aunt. I discovered a very different world that existed only for me. One that I entered everyday almost as soon as Amma left for work. The world of exotic and ordinary cooking. The world of Tarla Dalal.

Amma is one of ten children and the youngest of eight sisters. Her eldest sister had come to spend the summer with us. This aunt was married even before Amma was born. Many of my friends mistook her to be my grandmother and my aunt and I always joked that she was old enough to be my mother's mother and so there was nothing wrong if people thought she was my grandmother. This aunt was my partner in crime that summer. The very first day of my vacation, I wanted to make soup. She tried to tell me that it would be a waste as Amma had already made lunch. (As an IIT campus family, we all came home for lunch from school, work etc. and then went right back.) She also told me that when someone comes home on such a tight schedule, it is hard enough to eat a three course meal, let alone have soup first.

After much convincing, I agreed to make soup on a Saturday. It was a hit. After that, I started making a different soup each night for dinner. In between sessions of Rummy and endless TV watching (without any cable), I'd start making soup for dinner. My aunt was extremely fond of food. And I, of cooking. So we made a great pair and I think that was one of the factors that led to the summer of '92 being as enjoyable as it was. I learnt to make pakodas and some other amchi food. I also tried my hand at pani puri and bhel puri and made her the guinea pig. She wasn't the type who'd say something was good if it wasn't. So, if she said something was good, then you could bet all your money that it would be. She put up with my first attempt at handmade lasagne, navaratan korma and even enjoyed my black forest cake. 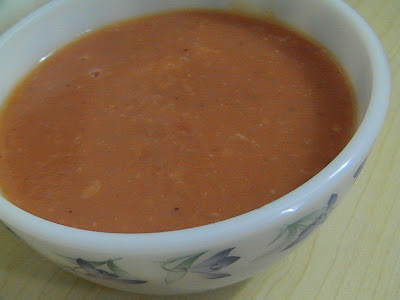 It was during this time that I learnt to make Carrot soup. I have modified the recipe over the years, but each time I make it, it turns out just fine. The recipe (found in one of Tarla Dalal's initial books) calls for English carrots, but I love the colour that the local carrots impart. And with most of my recipes, this one has also been tweaked.

Pressure cook the carrots, onions, potato and garlic with about 2-3 cups of water. Cool and blend in a liquidizer. Bring the mixture to a boil over low heat and stir in the milk. Add the salt, pepper and herbs and simmer for five minutes. Serve with warm toasted bread.

The 12th of January would have been my aunt's 90th birthday had she been with us. She departed last Saturday night. I will miss her for sure. But I think I had already started missing her over the past few years as she slipped into the illnesses that old age often brings. Her love for food, people and gossip is something I will fondly remember. Her affair with the "good things" in life took her all over the world, into the homes and hearts of many. Her generosity is something that has ensured she will be remembered for a long time. Not many people give away what they have with abandon.

Dearest Ramapachi: For touching lives in a way that only you could have, for love given unconditionally, for a life fully lived, I will always remember you.

Sorry to hear & May her soul rest in peace.

Hi Raaga,
I have been following ur blog for quite sometime, though I hvn't commented before. Liked ur blog and the non-food blog - onlineraaga. Good style of writing. I enjoy reading the anecdotes associated with ur recipes. Towards the end of ur blog, u made me feel missing ur aunt. May her soul rest in peace

Raaga
I am so sorry to hear that Ramapachi is no more but hey her memories n good things can be seen in you dear.

May her soul rest in peace..and ya the soup looks equally great and healthy

YUM!! What a great soup to have in this cold weather, atleast here!
Happy Monday Raaga. Since this has Garlic, you could send this to Sunita. Great post!:))

Sorry to hear about your aunt sweetie... Hugs! Looks like she had a wonderful life... and she left behind some nice memories to remember her by...

Sorry to hear about you aunty, but you have wonderful memories.
Delicious soup

soup looks very nice and perfect for this weather... Sorry about your aunt.

Perfect soup for this wintery weather. Looking back, its quite astonishing that so many people have infulenced our lives, knowingly or unknowingly. I am sorry for your loss.

Will definitely try it in this lousy cold weather. I tried the masala buns and they turned out great. Thanks!


Sorry about your aunt! Wishing her peace and all her near and dear ones strength to bear this loss.

A very happy new year to you and your family!

yeee..another wonderful way to have carrots during my lunch. Thanks for posting Raaga.

Sorry to hear of your loss, Raaga. This post is a lovely tribute to your aunt.

Thank you for the lovely messages. As you've rightly said, she will live in my memories.

Sorry to hear about your aunt passing on. But she will always be with you.
You ought to submit this to Heart Of The Matter's event this month -its heart healthy Soups over there.