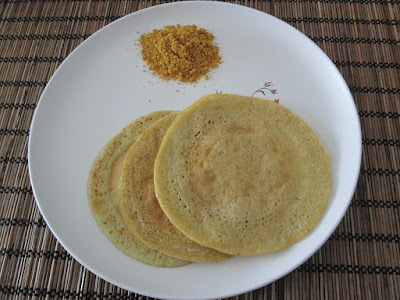 I miss going to work. The reasons are countless. One of the biggest food related pluses of going to work is getting to taste different kinds of dishes. One of the other pluses is getting new ideas for breakfast, lunch and dinner or just being able to give new twists to routine dishes. But the food related aspect I miss the most about working is being guaranteed company at mealtimes. Eating alone is a pain.
One of my former colleagues had a maid at home who would make the best breakfast dishes I've ever had out of a box. She could be on Masterchef. A sandwich would not only have a great filling, but would be cut in 4 pieces and there'd be a wee bit of tadka on each piece.
This breakfast idea comes from this lady. To me, a cheela was always made with besan. And a pesarattu was always made with whole green moong. To make a cheela with moong dal was unknown to me (I know a lot of you have known this a long long time.) as was making a pesarattu with moong dal. This is like a cross between a cheela and a pesarattu.
1 cup Moong Dal, soaked overnight
2 Green Chillies, roughly chopped
1" piece Ginger, roughly chopped
1 tsp Cumin Seeds
Salt to taste
Grind the moong dal with the green chillies, ginger, cumin and salt. Add enough water to make a thick batter.
Heat a tawa and smear a little oil on it. Simmer the flame and pour a ladleful of the batter in the centre of the tawa. Quickly spread the batter while forming concentric circles (spiral actually!). Add a little oil on the sides and centre. Usually not more than a few drops per cheela. When crisp, carefully turn the cheela over and allow the other side to cook a little.
I serve these with whatever I have on hand. But it tastes best with some green chutney. As a variation, you could also sprinkle some finely chopped onions and tomatoes on top of the batter as soon as you spread it on the tawa. This makes it a very visually appealing breakfast.
As long as you remember to soak the moong dal at night, this is a no sweat breakfast in the morning as there's no fermentation required.
Posted by Raaga on 12/29/2010

This is a staple for breakfast and I have always made cheela like this - in our home, besan is for "tomato omelets"! :)

If I don't have green chutney on hand, I love serving this with grated paneer and finely chopped onions and tomatoes on top - tastes delicious to have the crunchy topping with the soft cheela - and even better if sprinkled with some chaat masala.

And yes, I agree - eating lunch alone is a pain!

they look inviting !have heard abt this, though have never made cheelas from moong dal--besan ke cheele is a regular at our place though !!

pesararru it is for me ;). My mom used to make such moong dal attus (thick dosas) & we used eat with hot rice & ghee on the side. yum yum.

Wishing you a very Happy 2011 ahead Raaga.

I love these no-fuss dosas. :)

We too love these and I wonder why I haven't posted them till now.Yours really tempts me now :)

And wishing you a very Happy New Year :)

New to me. Looks nice . healthy too..