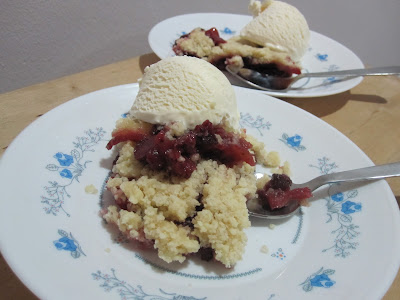 ﻿How does one even begin to summarize a year which seems to have packed in so much? The year which began for in the absolutely cold snow mountains and will end in the sunny and warm tropics. On January 1, 2010, if someone had told me that the year would bring a whole host of changes, I'd have laughed and said that that is what every year does. But as I look back today on the year gone by, I realize that this year was special.
There were so many ups and downs that this year brought with it. The highs outshone the lows and I am glad that the year will be remembered for the highs and it will only be a matter of time before the lows are forgotten.
On the blogging front, both my blogs suffered as a result of the highs and the lows. There simply wasn't any time. The project 365 suffered because as the monsoons began, my travel time to and from work increased from 3.5 hours a day to around 5.5 hours one way. While I did take loads of pictures, the last thing on my mind when I reached home just a little shy of midnight was to upload the pictures to the laptop or the blog. Slowly, I was so far behind that it didn't make sense to try to catch up.
The food blog suffered because there was no time. There was also no "new" cooking that happened. It is a miracle that cooking even happened on some days. I think August and September must have seen the maximum consumption of Maggi, Subway sandwiches and McDonald's burgers. We also ate out so often because that meant no washing up afterwards (a lifesaver when your maids have been thrown out of the city for 30 days).
In our initial days in Singapore, I barely cooked and definitely didn't cook new stuff. But I realized that I could churn out 3 meals a day with just 3 pans, a 2 hob induction cooker and a microwave. For someone whose kitchen articles make up 30-35% of the entire household stuff, that is a BIG revelation. The pressure cooker queen cooked for 30 days sans the sweet sound of the whistle of her precious cookers.

I have no plans for 2011. I hope to write about my experiences in a new place in my other blog. I hope to cook with the new variety of ingredients that I have access to. I hope to be able to try out the recipes that I could only fantasize about until I moved here. I don't want to make concrete plans. 2011 is going to be the "take it as it comes" year.

Keeping in with tradition, I leave you with a dessert recipe. A little warm, a little cold. A little tart, a little sweet. Just the way this year has been: a mixture of flavours that surprises you with each bite, but leaves you with a happy feeling when the last bit has been savoured.
Ingredients:
1 Apple, peeled and chopped 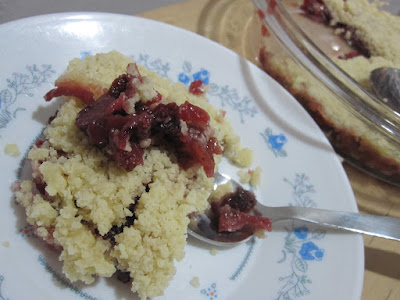 Arrange the fruit in a microwave safe dish and sprinkle the sugar. Build 2-3 layers alternating the fruit and the sugar. Leave about a spoonful of the sugar aside. Cook oh high in the microwave for 4-5 minutes.
In a separate bowl, mix the flour and the butter along with the remaining sugar until it resembles bread crumbs or small peas. Press this mixture over the cooked fruit and bake in the microwave on high for 8-10 minutes. Allow to stand for 10 minutes for the crust to harden. Cut into pieces and serve with vanilla ice cream.
I hope 2010 was a good year for each of you. Wishing all of you and yours a very happy 2011.
Posted by Raaga on 12/31/2010

Have a Great Year ahead-- sending across cheers n warm wishes !

Delicious! looking forward to a new year of experimentation with new ingrediants!

Happy new year to you. I hope you enjoy this year at your own pace as you want:)

Looking forward to your culinary adventures in the new year.
Wish you and your family a very Happy & Healthy New year.

Best wishes for a happy, prosperous and peaceful new year. It will be good!

Wishing you a very Happy New Year Raaga, hope you have a great year ahead!

Raga,
wish you a very happy new year ahead ..hugs and smiles

wow, looks superb dear, happy new year to you too :)

May this year bring you much happiness dear Raaga.

Singapore must be a very interesting place with so many cuisines coming together- are you enjoying it so far? Wishing you all good things in 2011!

Happy New Year!! I love your blog right from the time I first saw your nan khatai recipe... I wish this year brings lots of happiness to you.

I just finished making some and I love it. Delicious and easy!
dining room table

Thanks all! Happy New Year to all of you!

Nupur: Yes, we are enjoying Singapore... though I am a little wary of the food as most of it tends to be non vegetarian :)

The Foodie: Glad you like this space and the nankhatais... I shall let my mom know :-)

Love the fruity crumble. Is it wholewheat flour or APF? I think this is the first time I am coming to this place, yet to explore a lot. Shall keep coming, bets wishes and happy 2011.

I meant to comment here long ago. The crumble looks good. I'm sure I had something more substantial to say, but it's late and I'm off to bed :)