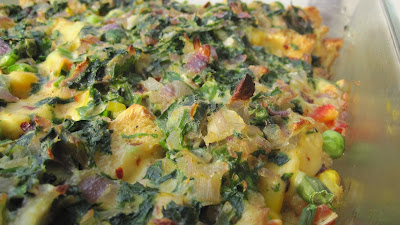 A few weeks ago, I had almost lost all my enthusiasm to cook. I was excited about being in a new house with a slightly bigger kitchen. But because my kitchen wasn't yet organized, I didn't seem to care that much about cooking. Also, thanks to some new cab routing issues, I was also getting home about an hour later than I used to earlier. So dinner was usually something I tried to "get over with" and lunch was anything that came together in 15 minutes or less.

Then came the end of November. And dear Nupur came up with her 40 recipes in 40 days schedule. She is to blame for a lot of things on this blog. Her series A-Z of Indian Vegetables is probably the very first blog event I ever participated in. Then, she very innocently put up this post about Eating Out While Eating In and that resulted in an entire series on my blog. So, I end this year with a mini 7-day marathon that Nupur is organizing.

Through Nupur's blog, I landed at Alanna's blog and bookmarked this recipe. Soon after, Nupur made this dish. I made it one winter afternoon, with several modifications, when I didn't feel like making a big lunch. It was a hit!

Salt and Pepper to Taste

Butter to grease the baking dish

Heat the olive oil in a pan and fry the onion for a minute. Add the spinach and cook for 3-4 minutes. Add the salt, stir well and keep aside. Preheat the oven to 375 F.

In a bowl, beat the egg well. Add the milk and cream along with the mustard. Add the chilli flakes and mixed herbs. Season with salt and pepper. Blend in the spinach onion mixture.

In the greased baking dish, place the bread and the mixed vegetables. Pour the egg-spinach mixture. Cover with grated cheese, season with salt and pepper and bake for 20 minutes.

I thought bread puddings only tasted great sweet, but this recipe is a keeper. Thanks Nupur and Alanna.

Ohh it looks so good and tempting..will try this one.

LOL I plead guilty and am happy we are living on opposite ends of the globe and blogging and eating together!

This recipe is so versatile and your version is chock-full with veggies.

I think I came across savoury bread puddings only after getting into the blogs, haven't made one yet, though!
Yours looks nice.

I'm definitely making this this weekend, if I can get past the snow to restock the larder...

Savory bread pudding looks like a real winner, Raaga! I find myself inspired by Nupur's events, too :) So you've got a new home, congrats! Look forward to seeing more dishes from the new kitchen :)

Looks good Raaga, totally new. Wishing you and your family Happy Holidays and a new year ahead.!

Wow Savoury pudding looks so tempting will try it for sure...

Yummy looking dish Raaga.. I prefer savory puddings over sweet ones.. so this is a keeper for me too!!

Very colorful..Another way to use the bread than making bread upma..

Raaga, I did take part in T and T of sunshine mom, but I have moved to a new space now. Will follow you from there.

Sure!! It does have a good amount of cheese in it, so pls go ahead and send me the details to be added for the Sunday Snacks Cheese event :)

Lovely tempting recipe. Pic looks good too. You have a nice space with interesting recipes. Following you.

Love the savory twist on a bread pudding! And I like the use of spinach here ... delectable and healthy!

I too make similar kind but with no spinach....like the addition of spinach, so may be next time I'll try with that....u got a nice space here.....wish u happy new year....