Here's what we thought...

I know this round up is about as late as it can get. I had everything ready for this post on time. I was rather organized (and I hope I haven’t left anyone out) this time around and as I wanted to save myself the last minute running around. But as luck would have it, I have been very busy otherwise and I am spending this morning, despite being under the weather, posting the round up as I am fairly determined to post my round up before the round up of the January event is up!


I received 17 entries in all to my Think Spice Think Carom event, and with the addition of my own entry, my event went on to become a full grown adult. Since we all thought about Carom so much, instead of a Pot Luck Party, we had a Thought Luck Party.


Here’s how the coming of age (well, sort of) party went: 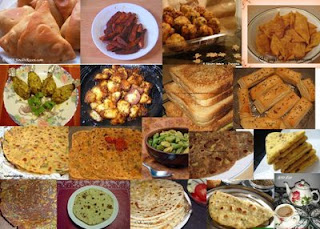 Alka walked in with a plate of samosas. We set those up on the table with my masala arbi fries. Navita brought a plate of pop in pakodas. As everyone started digging in, Gayatri opened her box of savoury shankarpali. Then Aquadaze, who had brought some grilled chicken noticed that one plate was empty and went back to bring some more masala arbi. That is when Deepika opened her box of low-fat grilled cauliflower sandwiches. The children and adults seemed to enjoy everything that was on the table. Some of the children found the snacks a little spicy. That’s when Sanika pointed them to her khari biscuits.


Suddenly, it was time for dinner. Aparna brought a stack of hot misi rotis. We ate those and Sanika’s ajwain parathas with Bee and Jai’s fansi dhokli. There were avocado parathas from Priya and some more ajwain parathas from Preety. I opened up a bottle of pickles and we polished off Chandni’s thepla and Meera’s masala rotli. I ran in and brought out some curd so that we could savour Soma’s ajwain dal paratha and Suma’s ajwain onion parathas.


We were all really full and PJ had exactly what we all needed to settle our stomachs after that fantastic meal, some vata tea.


So, all in all, it was a fun party and a rather great way to ring in the new year. Thank you all.

Email ThisBlogThis!Share to TwitterShare to FacebookShare to Pinterest
Labels: round up, TST

love the way you presented the roundup..gr8 job

What a fantastic way to round up all those great entries...thanks Raaga :-)

lip smacking rounup..glad tht winter is still around, so i can try out so many ajwain recipes
gr8 job done:-)

Lip smacking round up.I was the only one missing,as I did not have any idea apart from ajwain parathas and me being bad in rolling I let it go.Well I will have to perfect my skills and can use the variety of recipes here.

Loved the cute and clever round up... :)

lovely round up raaga!

The round-up is as scrumptious as the dishes it features :).

Thank you all. I figured I had to do something different as I was so late in posting the round up. I figured this would be interesting.

I am so glad you enjoyed the round up :-)

What a lovely coming of age party. A truly unique round-up presentation, loved it.

So well put together, Raaga! I really felt like I had joined a party :-)