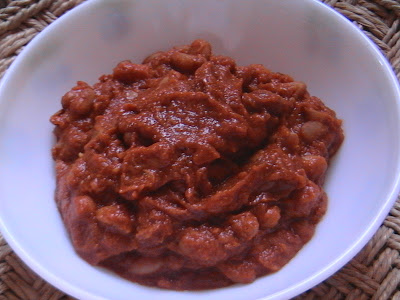 When I first planned to visit VaishnoDevi in November 2000, some colleagues said to me, "वहाँ पर राजमा चावल और छोले पूरी ज़रूर खाके आना।" (You must eat Rajma Rice and Chhole Puri there.) When I did eventually go a month later, I decided that I would try these two things. When we got there, I figured that these were the ONLY dishes available, on the way and at the venue. If I had to eat, I had to eat one of these. I am told that things have changed a great deal in the last decade.

Anyway, that was probably the first time I tasted rajma chawal outside my office cafeteria. I liked it quite a bit. There's also something about being tired and hungry during the climb in the cold that makes food taste extra special. I didn't try making it at home because our cafeteria made it at least 3 times a week. In fact there's this other story that's linked to Rajma.

One Sunday afternoon, I was rather sick of all the dal makhani, chhole, paneer and rajma. I didn't feel like making an elaborate lunch. (I didn't own a fridge then and stashing away leftovers in the August heat in Gurgaon isn't exactly a cakewalk.) I made myself some Tomato Rice. Just as I sat down to eat my lunch, my landlady's 7 year old rang my doorbell. He said, "मम्मी ने कहा की आप अकेले खाने के बजाय हमारे साथ खा लें।" (Mummy says that instead of eating alone, you should come have lunch with us.) I told him to thank her but also tell her that I'd already made my lunch. He was back in 2 minutes saying, "मम्मी ने कहा की आप अपना खाना लेकर नीचे आ जाएँ। हम साथ बैठकर खायेंगे। (Mummy says that you bring whatever you have cooked and we shall all eat together. Now, there was little I could do. I took my pressure pan downstairs and we got ready to eat. My landlady had made a special Sunday lunch: Rajma Rice. My tomato rice was polished off in no time by the four of them and we can all eat I was served more rajma rice. So much for wanting to not eat something.

2 Onions, ground to a paste

Pressure cook the kidney beans with 1/2 tsp ginger garlic paste in 3 cups of water. Drain the beans and retain the water.

In a pan, heat the oil and add the cumin seeds. When they crackle, add the onion paste and fry for a couple of minutes. Add the coriander powder, chilli powder, turmeric powder and salt and fry for a minute. Add the tomato puree and fry until the oil leaves the mixture. Add the cooked beans and the garam masala. Add the reserved water and boil the entire mixture. Garnish with coriander leaves.

Serve this with plain rice or Jeera Rice. I was serving it with rotis and so made it rather thick. When serving with rice, make sure that it has a pouring consistency.

I made rajma several times before and found that the beans didn't cook. I soaked the beans over night and then pressure cooked them for 20 whistles once. Rock hard! My colleague, P, told me to buy Chitra Rajma and ever since, the rajma I make is creamy. Thanks P.

Saath mein baithkar khaana. Nothing like it. What a sweet story and the rajma looks delicious.

It is true the place we have gone decades ago has changed dramatically, which is nice also i think.
Rajma looks so yumm.

That's a lovely neigbour you have :)

Haha..loved reading through the story..!!Rajma looks creamy and delicious.One of my favourites and I prefer the slightly mashed Rajma than the gigantic shape it gets aafter getting cooked!!

Vaishno Devi and Haji ali Durgah are among the few places I badly want to visit!!

I have been asking questions in my last few comments here, so no more.:)
Rajma and rice is one fo my husband's favourites. I have heard a lot of people refer to this as "Rajamma" in Kerala! :D
I wouldn't mind a landlady like that one of yours.

Poor you, having to eat Rajma when you didn't absolutely want to. Recently, on our Singapore trip, despite my requests that I wanted to try local food, our friends took us to Anjappar restaurant (branch of the Madras outfit) to eat Chettinad food and ordered a Chinese (Indian Chinese) dish to honour my request for local food!

How I wish my neighbour would invite me over for lunch too...just like that..:) But I don't even know her name!
Vaishno Devi Rajma is some of the best! I should be in India by the end of April, will touch base and definitely pig out together!

Hope you had a good Gudi Padvo Raaga.

Rajma is one of my favorite comfort foods.

this looks so yummy, dear raaga. i can eat rajma chawal anywhere any time.

yoyu amaze me, where do you get the time to cook with you trappings as in the hr job ?

you have a good blog. I think you should submit your articles at our articles directory - www.addmyarticles.com free of cost to increase exposure to your articles and your popularity as an author. All you need to do is create a free account and start submitting.