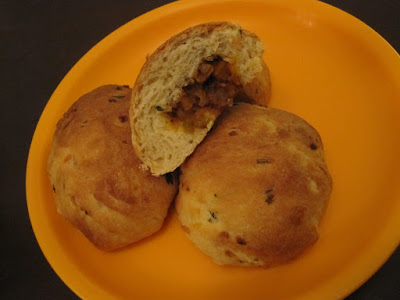 I have resumed baking and suddenly there's no stopping me. I was going through the recipes on this blog and decided to make some stuffed buns since Amma had been mentioning them for a while. I couldn't decide which kind of buns to make.
I remembered that S once ate Vada Pav at the Bombay airport and he told me the vada had been baked inside the pav. I thought that was a great idea. The more I thought about it, the more I felt that Pav Bhaji would be as good a candidate for something like this as Vada Pav was. The idea took shape in my head and soon the buns were taking shape in my hands.
We enjoyed this mess free "pav bhaji" for dinner tonight.
For the dough:
3 cups Bread Flour
3 tbsp Oil
3 tbsp Fresh Yeast/1 Envelope Active Dry Yeast
3 tbsp Sugar
11/2 tsp Salt
1/2 cup Boiling water
1/2 cup Milk
1/4 cup Coriander Leaves, chopped
For the filling:
1 large Potato, washed and chopped finely
1 Onion, finely chopped
1/2 Capsicum, finely chopped
1/4 cup Cauliflower, finely chopped
2 tbsp Carrot, finely chopped
2 tbsp Beans, finely chopped
2 tbsp Peas
1 tbsp Tomato paste
1 tbsp Oil
1/4 tsp Garlic Paste
1 tsp Chilli Powder
1/2 tsp Turmeric Powder
1 tsp Cumin-Coriander Powder
1 tsp Pav Bhaji Masala
Salt to taste
Take a huge mixing bowl and place the oil, salt and sugar in it. Add boiling water and mix until the sugar dissolves. Add the milk now to bring the mixture to room temperature. Add the yeast and mix well. Add the flour, coriander leaves, onion-garlic mixture and knead into a dough. Place the dough in a greased vessel and cover it with a damp muslin cloth. Allow to rise until double in size (roughly 45-50 minutes).
Knead the dough for a minute and then divide into 16 equal portions.
For the filling:
Pressure cook the peas along with the chopped carrots, beans, cauliflower and potato. Drain.
Heat the oil and add the onions and garlic paste. After a few minutes, add the capsicum and fry for another 2-3 minutes. Add the tomato pasteand fry for a few minutes. Add the other vegetables, salt, chilli, turmeric and cumin-coriander powders. Add the pav bhaji masala and fry for 2-3 minutes. Cover and cook the mixture for 4-5 minutes. Remove the lid and cook until the mixture is dry.
To Proceed:
Preheat the oven to 400F.
Take a portion of the dough and spread it on to your palm. Place some stuffing in the centre and bring the edges and seal. Place on a greased baking sheet or tray. Repeat with the other portions.
Allow to rise for 50-60 minutes and then bake for 12-15 minutes.
Cut the buns in half and spread a little butter on them. Enjoy them hot.
This turned out to be the easiest way to eat "Pav Bhaji" sans the mess. I suppose one could mix chopped onions and coriander along with the bhaji and then stuff it into the dough for a more authentic street side experience.
Posted by Raaga on 4/12/2011

Trust you to come up with such creative bakes..good to see you resume blogging.Definitely bookmarked!

That was a novel recipe and truly loved it. Bookmarked and on my list today. Thanks for sharing.

Nice one Raaga!! I had tried out one of the buns recipe from ur site earlier and it worked well for me. Nice to see u in action :-)

First time here...You have a set of good recipes here...Buns look lovely :) Drop in at my space too..!!

blue berry muffins looks so delicious...I know the feeling when ever i visit INA market or modren bazzar my condition is also like that :). First time on your blog... happy to be here !