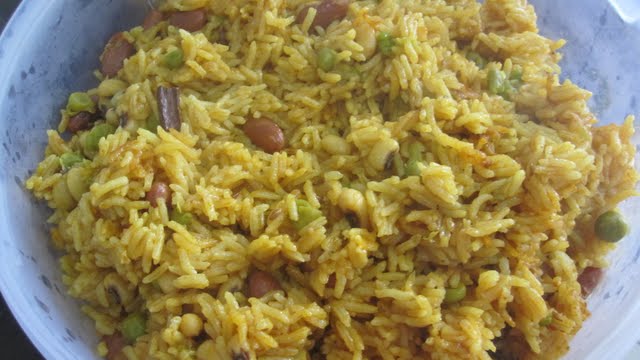 It was one of those days. I had the day off and S had to be at work (on a Saturday). Since it was a no-rush day for me, I offered to drop him at work and also told him that I’d make hot lunch and bring it to the office at lunch time. (That way, I didn’t have to rustle something up in a hurry before he left.) On the way back home, I had some bank errands to run and I used all that time to figure out what I could cook. I even decided to have lunch with a friend. But that friend had other plans. She wanted to visit the Book Fair. Now, I wanted to go too, but I’d promised S hot lunch. I had not only promised to take lunch for S, I’d also promised to take lunch for everyone in the office who was forced to work that day. I thought I had all morning to cook, but as it turned out, my friend was leaving for the book fair within the hour.
I rushed home and bought a tub of Jeera Raita from the store within our complex. I had no idea what I was going to do. When I entered the kitchen, I saw some black eyed peas on the counter that I’d soaked that morning. I decided to make a pulao with those and serve it along with a raita. I opened the fridge to bring out some tomatoes and I remembered the cooked kidney beans that I’d stashed away in the freezer. I also found a bag of green peas. So, I made a sort of “everything in it” pulao. Very impromptu, very tasty (hearsay – I didn’t get to taste even a little) and very simple, given the ingredients I had at hand. Here is the recipe if you’re making it for 2-3 people.
1 cup Basmati Rice, washed and drained
1 cup Red Kidney Beans (Rajma), soaked overnight and cooked
½ cup Black Eyed Peas, soaked for 2 hours
½ cup Green Peas
1 Onion, finely chopped
½ cup Tomato Puree
1 tbsp Oil
1 tsp Cumin Seeds
1 2” stick Cinnamon
3 Cloves
2 tsp Ginger-Garlic-Chilli paste
½ tsp Turmeric
½ tsp Chilli Powder
Salt to taste
Heat the oil in a pressure pan and add the cumin seeds. When they crackle, add the cinnamon and cloves. Add the onions and fry for a minute. Add the garlic-chilli-ginger paste and fry for 3-4 minutes. Add the salt, turmeric and chilli powder and fry for another minute. Add the tomato puree and allow the entire mixture to boil.
Add the rice and allow the mixture to coat the grains. Add the kidney beans, black eyed peas and green peas. Add 2 cups of water and cover and cook for 2-3 whistles.
Open the cooker when the pressure is released and fluff gently with a fork. Serve with a raita.
While the pulao was cooking, I chopped a couple of tomatoes and a cucumber and mixed them along with the contents of the Raita tub. The pulao was transferred into one box and the raita into another. The boxes were delivered to S along with the car and the car keys. And I left with my friend for a fun filled day at the fair.
Posted by Raaga on 6/28/2010

1 cup of uncooked rice feeds 2-3 people? ;) I always add rajma/ soaked channa if its on hand to rice dish/ pulav/ khichdi, to up the protein content ....looks good.

This is a healthy version for sure. Looks yumm :)

That look so good, I'm going to give it a try thanks for providing the recipe, if it turn out as good as it looks then I will owe you one

@Leon: Waiting to hear from you.

I feel inept, I can never get any kind of grain/rice to cook correctly. any tips?

gorgeous rice.....totally healthy and it looks so delicious. I love rajma and this sounds great.

hi sorry if this is the wrong place to ask this question (maybe i should ask it in the thair vada post) but i feel more sure of it being seen here! in the instant thair vada (which i just saw today and am dying to try) urad dal powder is just plain powdered urad dal, right? i can just powder it in the mixie?
pl let me know.
thanks,
d

D: Yes. It is just ground udad dal. I got a readymade packet.

You are a star