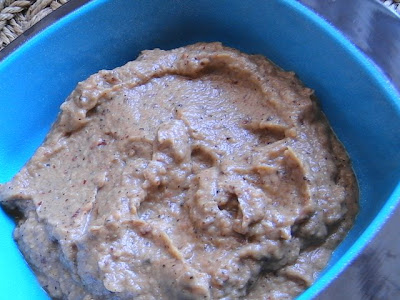 Smoked brinjal. Something I really detested while growing up. Amma didn't make bharta back then, but she did make this thuvayal/thogayal every once in a while. Later, she learnt that one could steam the brinjal in the cooker and started making it that way. I could more than tolerate that as it didn't have the "smokey" flavour. I even remember her using the microwave to roast the brinjal, but she says she hasn't tried. I insist that she did. (I've lived away for so long now that at times I met my other relatives almost as often as I met my parents. So, maybe she is right after all.)

This thuvayal is a favourite of many and S tells me that this is made in Andhra Pradesh as well. So, it is one dish that is common to both households. I have, of late, started to enjoy the flavour. Maybe it is all the bharta that I get to eat at work (at home too!) or maybe my tastes have simply evolved over time.

Oil to brush the brinjal

Place the brinjal in a bowl of water. Cool and remove the skin.

Heat the oil in a kadhai and fry the red chillies, mustard, asafoetida and urad dal for a couple of minutes. Grind the chillies along with the tamarind paste and salt. Add the brinjal and grind again. Finally, add the fried mustard and urad dal and grind lightly.

As a variation to this, you could substitute the red chillies with an equal number of green chillies (more or less, depending on your taste). Back home, that's how Amma makes it.


While this is great with some rice and papads, it makes a great chutney to go with idlis and dosas. Especially, if you, like me, are trying to reduce your dependence on coconut for chutneys.

Ayyo!This is what I was searching for...smoked brinjal and roasted mustard gives a great flavor! I tasted a chutney in Murugan idly shop which my FIL said its sutta katrikai thogayal,u all people forgot this recipe at all,from that time,i was mad in tryin this combo,thanks for posting!!

I too roast the brinjal on open flame for making bharta..though never made brinjal chutney before, will try some day..

this is new one to me! will try out raaga!

I have tasted this, but never made it. So, what should I do if I don't have an open flame? Would roasting in an oven work?

I guess this is a South Indian version of bharta .. We call ir badanekai hindi in Kannada & I love that smoky flavor

i realised, subscriptions via reader means that i am leaving lesser and lesser comments :( without realising!! i have been making kathrikai thogayal / chutney quite a bit too... i like it a little spicy and with dosa!! yumm!

My mother-in -law introduced me to the roasted brinjal chutney and I have started making them ever since. I bake them in the oven, that way it does not set my fire alarm...Lovely chutney.

I simply adore this thuvayal! The smoky flavor rocks! :)

Hi! Remember few months back I wrote to u asking for places where I could buy my baking stuff..still exploring ..I have started my blog .Do drop in and have a look.Will keep in touch.

wow.. I love kathirikkai thuvayal very much. I too tried this thuvayal and it came out very well.. Cabbage thuvayal can also be tried in the same way :)