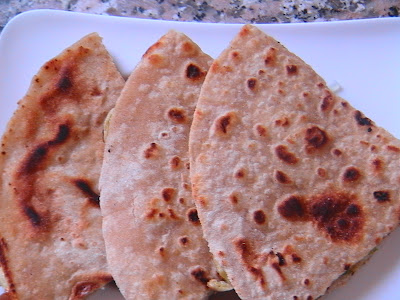 I love using up leftovers. These days we don't have as many leftovers as I am learning to cook just what we need. But every now and then, we do end up with stuff. In more ways than one, it makes my life easier when I have something. But at times, I tend to think up more than one dish with the leftovers and can't decide. So, my maid gets to take extra stuff home on those days. I'd much rather someone eat the stuff than waste it.

On several occasions, we are left with rotis. I try and make something nice so the rotis aren't boring. Kothu Roti and Egg Paratha are some of the things I've tried. I tried Amma's cauliflower and cheese paratha recipe with used up rotis (she makes them fresh). Since the cheese melts, the rotis stick together. This one's a keeper. 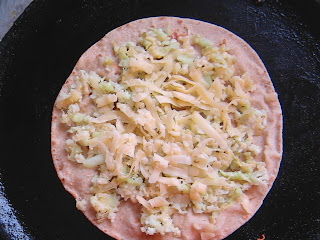 Heat a griddle (tawa) and grease it lightly.

Off these parathas go to Mansi who is hosting this month's WBB, my dear friend Nandita’s initiative. This month's theme is "Balnced Breakfasts" and she urges us to include Fruits or Vegetables, Grains, Dairy or Protein. I have used all four four food groups in this dish. The rotis are made from wheat flour and soya flour. The stuffing has cauliflower and cheese. I couldn't have gotten a better dish.

Nice way to use the left over parathas.

Nice One Raaga... Additing Cheese brings in flavour & good healthy Breakfast for all..

Thanks all...the cheese adds taste and also helps the two rotis stick... quite like quesadillas.

Looks really good and adding cheese to it yumm

There, you said it, it reminds me of quesadillas :). Lovely way to use leftover rotis.

Excellent idea to use leftovers...never tried parathas with cheese !!

your amma is an amazing cook. i never cease to marvel at her creations.

looks amazing, Raaga! I make this quick snack called 'Roti Fry' from left over rotis. I'll post it soon sometime. It's awesome what one can make out of leftovers!

hi,
i wanted to email you, but could not locate your email address on the blog.
blogsjam is a new web-based blog reader, organized by channels.


pl. check it out, and contact me at saibose@gmail.com, if you have any questions.
we also have a cool widget, that will not only help get more
distribution for your blog,
but it can also be used to feature fresh and contextual posts on your blog.

PS: If you would like to showcase blog posts from your other blogs (to drive traffic to your other blogs or blogs you like), you can use our the customised version of our widget as well. Just drop in an email :-)

All in one dish. Looks delicious. thanks for sharing.

I was just planning on making these parathas Raaga! I even bought cauliflower for it 2 days backs! This post couldn't have come on a better time:)

Thanks so much for participating in WBB!!:)

u have used all the 4 things mansi asked for! good one raaga:)

I have been following your food
blog for a while now as a silent
reader but have not commented
until now..all I can say is
"WOW your recipes look great",
and I want to cook them all :-)

I would like to get to know
you more, with your talent
for cooking then your going to
be a great friend to have.

Feel free to join our cooking
forum, you are very welcome
to join us.

You have such an amazing food
blog that I am sure our other
cooking members would love to know
more about it.

Thanks from
Jeena xx
Jeenaskitchen.com

Thanks all... my mother is a huge source of recipes and inspiration :-) I will let her know that you've all enjoyed this.